(ATTN: UPDATES throughout with unification ministry's response)
By Yi Won-ju

SEOUL, April 4 (Yonhap) -- The South Korean government called Monday on North Korea to refrain from escalating tensions in the region, responding to the latest statement, directed at Seoul, by Kim Yo-jong, the influential sister of North Korea's leader.

"The Ministry of Unification clearly points out that North Korea should not cause additional tension on the Korean Peninsula in any case," the ministry's spokesperson Lee Jong-joo told a regular press briefing.

The ministry, which handles inter-Korean affairs, "strongly urges" the North to return to the path toward dialogue and cooperation instead of tension and confrontation, according to Lee.

At the weekend, Kim unleashed harsh criticism of the South's defense chief, coupled with a threat of "serious" consequences in bilateral relations. Pyongyang will "reconsider a lot of things concerning South Korea," she added, as she reminded the South that the North is a "nuclear weapons state."

She took issue with Defense Minister Suh Wook's remarks that his troops maintain "preemptive strike" capabilities for use if necessary.

Last Friday, Suh said openly that his troops have the capabilities to "accurately and swiftly" strike the origin of North Korea's missile firing as well as command and support facilities in the case of clear signs of a launch toward the South.

Issuing her first public statement on South Korea in several months, Kim, vice department director of the Central Committee of the Workers' Party of Korea (WPK), described the minister as a "senseless and scum-like guy."

In spite of her strongly worded message against Seoul, the two Koreas had their daily call at 9 a.m. Monday as usual via the inter-Korean liaison office, officials here said. 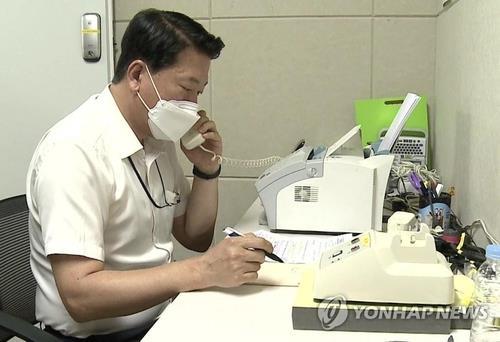