SEOUL, April 5 (Yonhap) -- The top executive of Dutch semiconductor equipment maker ASML is in South Korea to discuss semiconductor cooperation in the country where its key clients are based, the company said Tuesday.

ASML CEO Peter Wennink is visiting the country for a chip cluster project and meetings with local employees as the company is expanding its Korean operations amid the continued chip shortage, according to the company.

The company's spokesperson said there is no official meeting scheduled with its key clients this time, declining to give further details of the trip.

The last time Wennink visited the country in November, he met with officials from Samsung and SK hynix to discuss chip development and supply issues.

Samsung Electronics Vice Chairman Lee Jae-yong visited the headquarters of ASML in the Netherlands in October 2020 to discuss supply plans of EUV equipment essential for producing chips with the 7-nanometer process or below, cooperation in advanced semiconductor manufacturing technology and the industry outlook amid the COVID-19 pandemic. 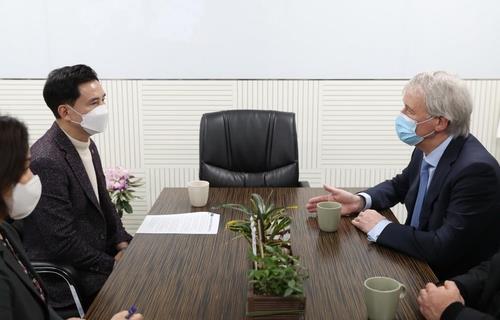 In a recent interview with the Financial Times, Wennink said the company was unable to keep up with global demand fast enough, and the industry is feared to face a two-year shortage of key chipmaking machines.

On Monday, Wennink visited Hwaseong, some 40 kilometers south of Seoul, to talk with city officials about a semiconductor cluster currently under construction and ways to nurture local talent, the city said.

"The ASML Hwaseong semiconductor cluster is going smoothly thanks to strong support from the city," the city quoted Wennink as saying, adding that the CEO vowed to continue working closely with the city.

In November, ASML signed a memorandum of understanding with Hwaseong to invest 240 billion won (US$212 million) in building a 16,000-square-meter chip cluster there by 2024. The facilities will include an office that can house up to 1,500 employees, training and repair centers for EUV machines.

South Korea is ASML's key market that represented 33.4 percent of its 2021 total net sales, according the company. It was 29.7 percent the previous year.

The Veldhoven-based company started operations in South Korea in 1996, with global distribution, support and training centers located in four cities -- Cheongju, South Chungcheong Province, Hwaseong, Pyeongtaek and Icheon, all in Gyeonggi Province. It has more than 1,400 local employees, with 70 percent of them young millennials, the company said.

Earlier this year, Wennink said the company would aggressively expand Korean operations and hire an additional 1,000 local employees by 2029.