On the table was the Indo-Pacific Economic Framework (IPEF), which the U.S. has sought to launch in the region amid an intensifying Sino-U.S. rivalry.

Yeo said South Korea is positively reviewing the participation in the framework, as the platform is expected to serve a crucial role in enhancing regional cooperation in a wide range of issues, including digital trade, clean energy and supply chains.

Tehan said consultations for its official launch are likely to begin in around April and May, stressing deeper trade and investment ties among key regional players, according to the ministry.

"The two sides have formed a complementary cooperative structure and maintained a close economic relationship in various fields based on the FTA. Looking forward, they agreed to further develop future-oriented ties via the IPEF," the ministry said in a release.

Bilateral trade between South Korea and Australia reached an all-time high of US$42.7 billion last year, up 71 percent from a year earlier.

During the meeting, Yeo asked for Australia's support for South Korea's push to join the Comprehensive and Progressive Agreement for Trans-Pacific Partnership (CPTPP).

The Seoul government is working to submit an official application to join the mega free trade deal in the Asia-Pacific region, which involves 11 nations, including Australia, Japan, Canada, Mexico and Vietnam.

It accounted for around 15 percent of the world's total trade volume of $5.2 trillion as of 2020.

"The Australian side welcomed the move, and vowed active support for Seoul's accession to the CPTPP," the ministry said. 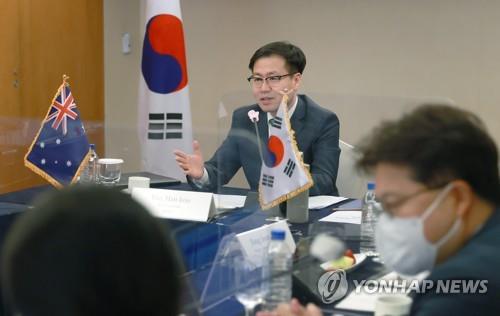