SEOUL, April 6 (Yonhap) -- President-elect Yoon Suk-yeol said Wednesday he plans to upgrade relations with Germany as he met with the country's top envoy to Seoul.

Yoon noted during the meeting with Amb. Michael Reiffenstuel that Germany is South Korea's biggest trading partner among the member states of the European Union.

"I plan to further upgrade our cooperative relations with Germany," he said at his office, noting that Germany has contributed greatly to South Korea's economic and scientific development since the 1960s. 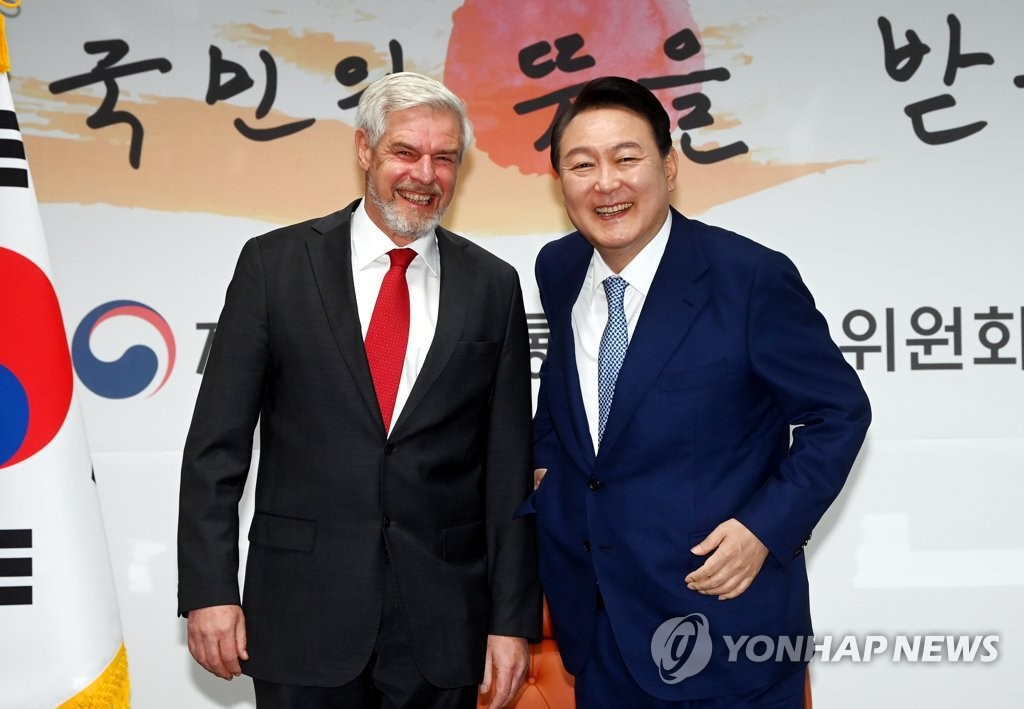 The president-elect said that based on the two countries' solid cooperation in economic, cultural and other areas over the years, they should boost joint efforts to deal with climate change, new and renewable energy, science and technology and digital issues, his spokesperson, Bae Hyun-jin, said in a written briefing.

Reiffenstuel enthusiastically expressed his agreement with Yoon, saying he will make active efforts for close cooperation.

The two further agreed on the need to support Ukraine in its war against Russia, with both countries fulfilling the "responsible role" of the international community, Bae said.

Yoon thanked Reiffenstuel for the congratulatory message sent by German President Frank-Walter Steinmeier upon his election.

The two exchanged pleasantries on their common background in law. Yoon was a prosecutor-general before being elected president, while Reiffenstuel studied law before entering the foreign service.

"I think legal professionals have a similar way of thinking," the ambassador remarked.

(2nd LD) Yoon says he will upgrade relations with Germany

(2nd LD) Yoon says he will upgrade relations with Germany