SEOUL, April 6 (Yonhap) -- Four South Korean players in Major League Baseball (MLB) will go into the 2022 season with varying degrees of job security. Two veterans will renew their divisional rivalry in the American League, and a couple of 20-something utility-type players will try to secure a steadier role on their respective clubs in the National League.

After being the Opening Day starter for the Toronto Blue Jays in each of the past two years, Ryu Hyun-jin will begin this season, Year 3 of his four-year, US$80 million deal, as the club's No. 3 starter. That's perhaps more of reflection on the depth of the Blue Jays' rotation than on Ryu's ability, though the 35-year-old is coming off an up-and-down season. 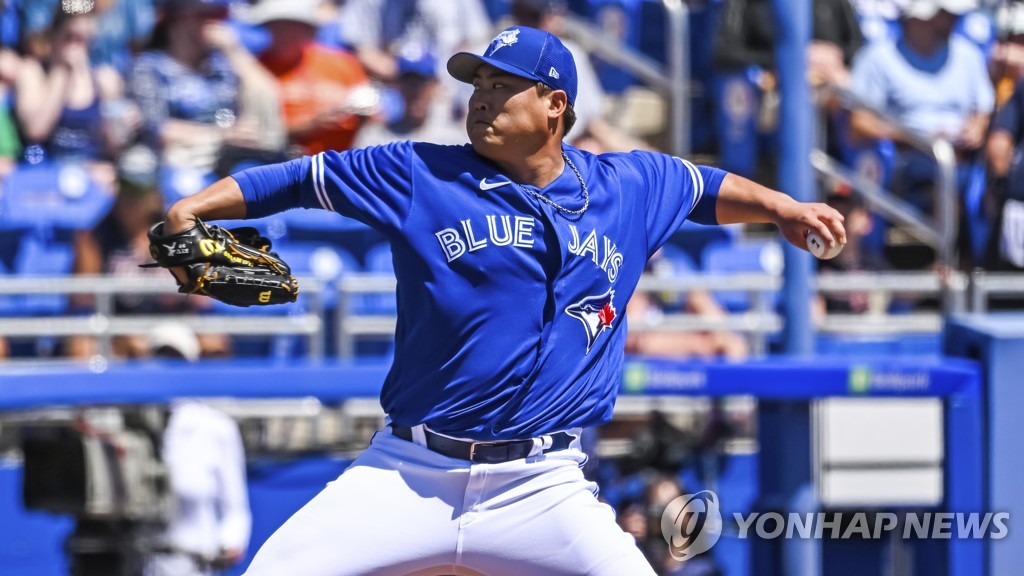 In 2021, Ryu posted a career-worst 4.37 ERA over 169 innings, while striking out about two fewer batters per nine innings than he had in 2020, when he finished third in the American League Cy Young Award voting.

The Blue Jays locked down Jose Berrios, a midseason trade acquisition from last year, with a seven-year extension and gave him the Opening Day nod. Toronto also signed free agent righty Kevin Gausman, who put up a career-low 2.81 ERA for the San Francisco Giants last year while riding a devastating splitter to a 14-6 record. Gausman will be No. 2 starter ahead of Ryu.

Ryu has said it doesn't matter in what order he takes the mound, as long as he does his job consistently. His stated goal, as has been the case every season, is to make at least 30 starts and have a sub-3.00 ERA.

Ryu, 35, made one official spring training start on March 25, when he allowed three runs in three innings against the Detroit Tigers, and later pitched in an intrasquad scrimmage and then a simulated game. He has built up to 76 pitches. 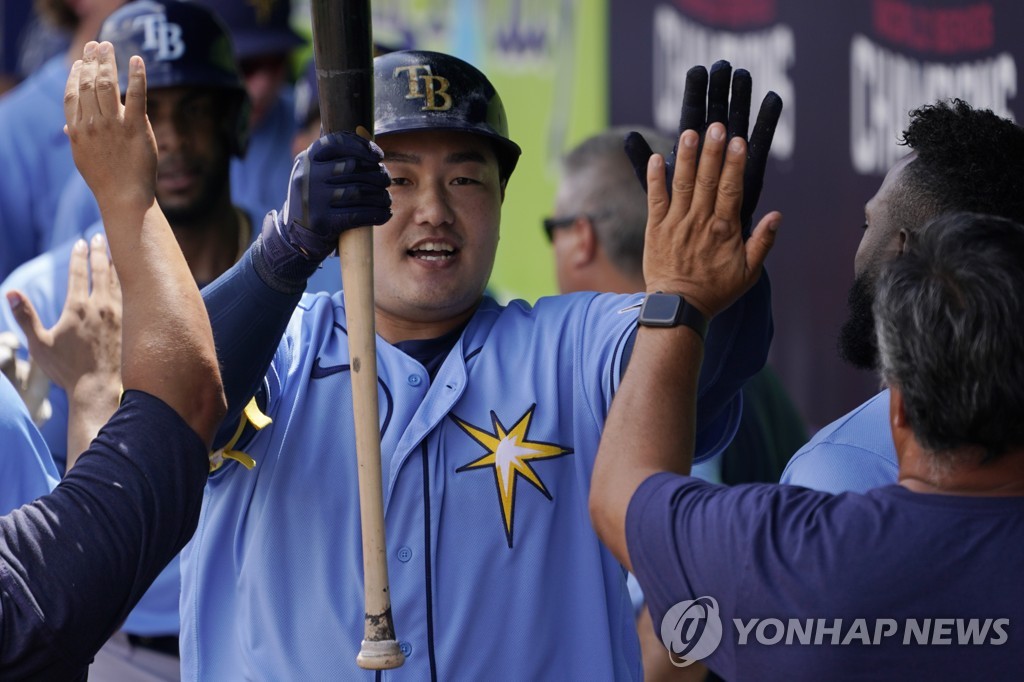 By adding Gausman and Gold Glove-winning third baseman Matt Chapman to an already talented young core, the Blue Jays are being seen as a favorite to win the American League (AL) East division crown.

But the Tampa Bay Rays, the two-time reigning division champions, will have something to say about that.

The Rays' South Korean first baseman, Choi Ji-man, is entering his fifth season with the Rays and his fourth full campaign. He was limited to just 83 games last year while battling assorted injuries, and batted .229/.348/.411 with 11 home runs and 45 RBIs.

Choi, 30, isn't about to lose his job as their regular first baseman, or at least the one that mostly plays against right-handed pitchers. But his spring training numbers haven't exactly blown anybody away. After batting 0-for-1 with two walks against the Atlanta Braves on Tuesday in Florida, Choi saw his spring batting average drop to .063 (1-for-16). The only consolation is that Choi has a .407 on-base percentage, on the strength of 10 walks. The Rays have one more spring training game Wednesday. 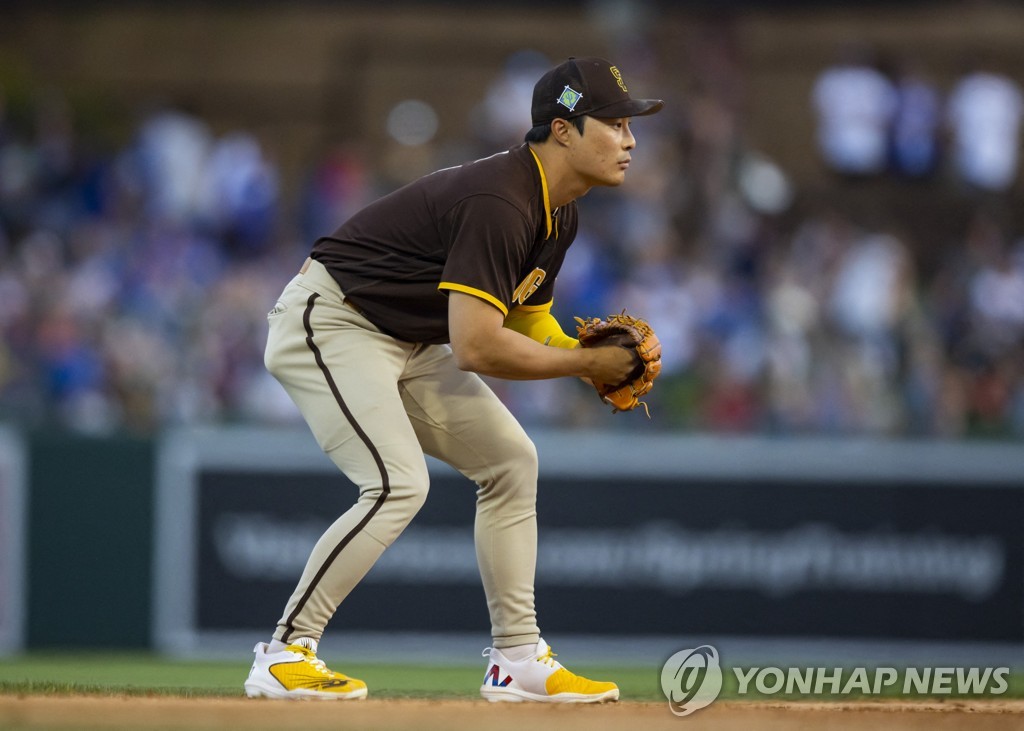 Over in the National League, Kim Ha-seong of the San Diego Padres will try to improve on a rookie season in which his defensive contributions were overshadowed by struggles at the plate.

One of the top-hitting shortstops in the Korea Baseball Organization (KBO) for several years, Kim only managed a .202/.270/.352 line in 117 games last year. More regular playing time would have allowed Kim to settle into a rhythm. But with the left side of San Diego's infield occupied by two MVP candidates -- Manny Machado at third and Fernando Tatis Jr. at shortstop -- Kim bounced around the infield while coming off the bench most of the time.

The athletic fielder flashed his glove while handling second base, third base and shortstop positions. With Tatis sidelined for up to three months with a wrist injury to start this season, Kim will likely get more consistent opportunities.

Park Hoy-jun is in a battle for a roster spot on the Pittsburgh Pirates, though it isn't exactly clear for which position. 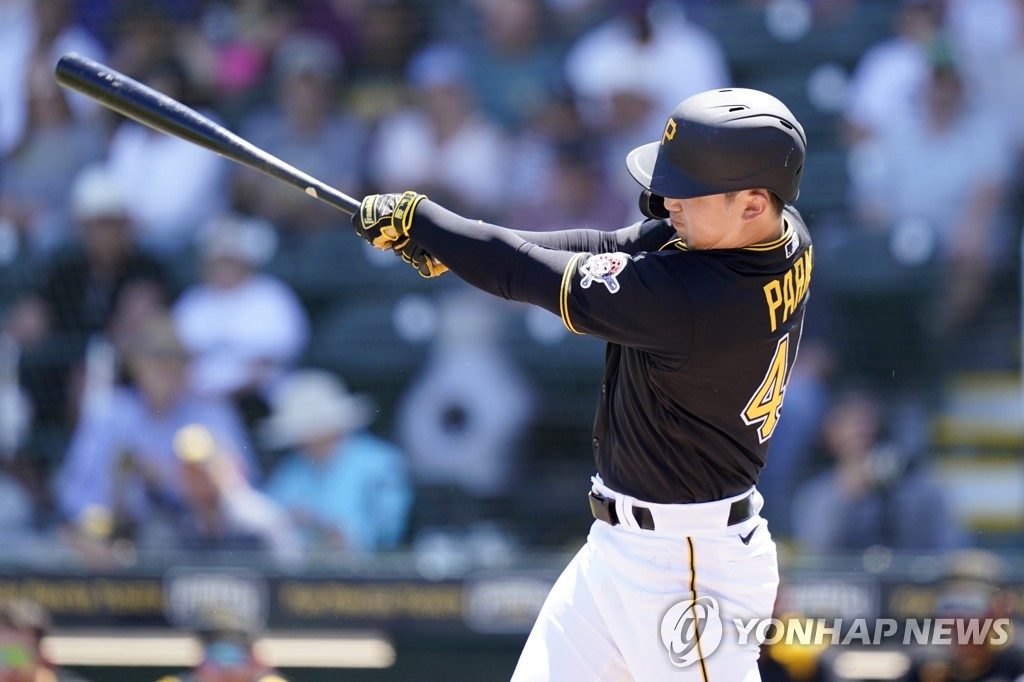 After getting traded to Pittsburgh by the New York Yankees last summer, Park, who was a shortstop in high school in South Korea, appeared at six positions: shortstop, second base, third base and all three outfield positions.

During spring training, Park played second base, third base, shortstop and right field,

Despite having a delayed start to spring training, following a bout with COVID-19 and a holdup in getting his work permit issued, Park, 25, still put up encouraging numbers. He finished camp with a seven-game hitting streak and a .308/.357/.577 line, along with two home runs, two RBIs and a steal in nine games.

The Padres and the Pirates will begin their season Thursday, and the Blue Jays and the Rays will play their first games on Friday.

Divisional battle, roster competition ahead for S. Koreans in MLB

Divisional battle, roster competition ahead for S. Koreans in MLB