SEOUL, April 6 (Yonhap) -- Residents and environmentalists protested Wednesday against President-elect Yoon Suk-yeol's plan to move the presidential office to Seoul's Yongsan district, lambasting it as being rushed without public support.

Yoon has been pushing to move the presidential office out of Cheong Wa Dae and into the defense ministry compound in Yongsan, central Seoul, saying the relocation would help him connect better with the people.

Holding a press conference in front of the ministry compound earlier in the day, an association of Yongsan residents and environmentalists also claimed a rushed relocation could derail a national park establishment project in the neighborhood and cause traffic congestion.

"At a time when 58 percent of the people object to it, (Yoon's) manner of vowing to finish the relocation, a task that requires public consent, within 50 days is tantamount to a one-sided notice, rather than communication," a protester said, referring to a recent poll.

They said the relocation, if carried out in a rushed manner, could interrupt the complete execution of a project to build Yongsan Park, referring to a national park project being carried out in the neighborhood following the departure of a U.S. military base there.

They said the resolution of environmental issues stemming from the military base should be put ahead of the relocation project.

"The owners of this country are people, and the owners of Yongsan are its residents," an activist said. "(Yoon) should stop politics of no communication and instead listen to the voices of people." 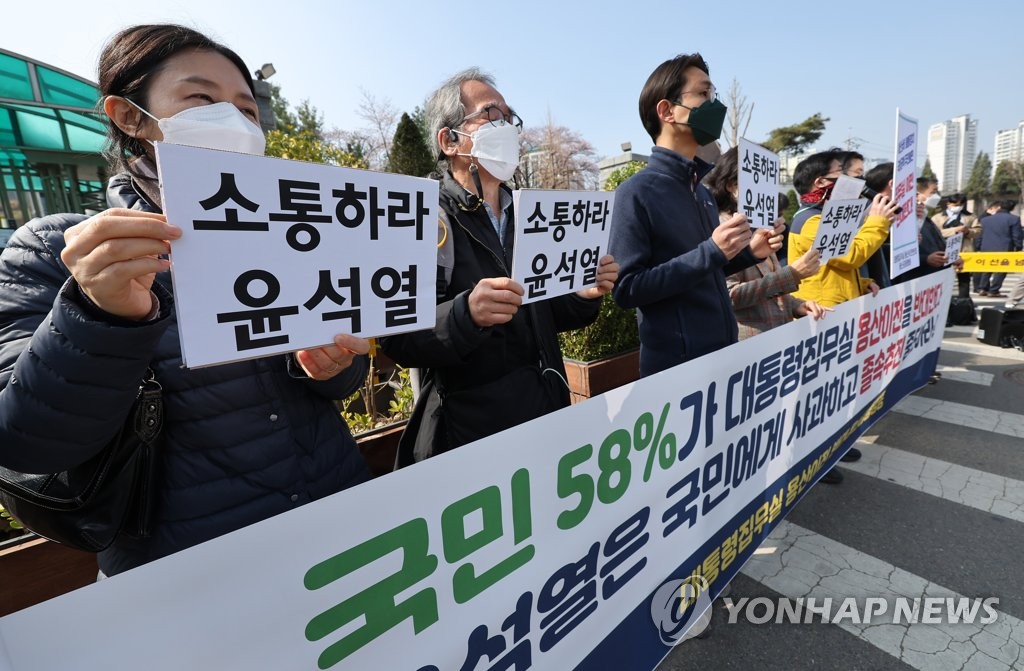