JEJU, April 6 (Yonhap) -- The southern island of Jeju is moving to resume its visa waiver program for international travelers, which has been suspended for the past two years during the pandemic, officials said Wednesday.

Jeju Province officials have recently visited the culture, land and justice ministries and requested they discuss the reinstatement of visa-free entry during upcoming meetings of the central COVID-19 response body, they said.

Local business and tourism organizations have also lobbied political parties and government agencies to have the suspension lifted.

The policy aimed at boosting tourism on the resort island was introduced in 2002, allowing international travelers to stay for up to 30 days without a visa.

The measure was halted on Feb. 4, 2020, following the outbreak of the pandemic. International flights were also suspended at Jeju International Airport in April 2020. 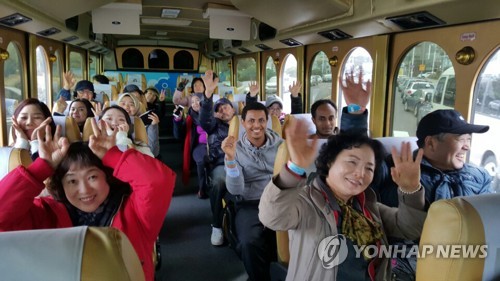 With the latest wave of infections showing signs of subsiding, the nation has recently relaxed border restrictions, exempting fully vaccinated visitors from mandatory quarantine on arrival.

The interior ministry also announced Wednesday the operations of international flights will be normalized at some regional airports, including the Jeju airport, starting next month.

The Jeju government and businesses are stepping up preparations for the return of international tourists.

"We will actively enhance Jeju's competitiveness as an international tourist destination," said Kim Ae-sook, head of the tourism bureau of the provincial government.

"We will strive to attract foreign tourists by promoting Jeju's image as a clean and safe destination, developing products reflecting the latest trends, resuming the visa-free entry program and recovering international flights promptly," she added.

The Jeju government is preparing measures to attract more chartered flights to the airport and increase direct flights with foreign cities.

The government and tourism organizations are carrying out campaigns overseas to promote the island's tourist attractions and culture, including Olle Trail, a long-distance footpath around the island, and "haenyeo," traditional female divers inscribed on UNESCO's Intangible Cultural Heritage in 2016, officials said.

The province also plans to hold business forums with airlines, travel agencies and tourist product developers of foreign countries in April and May.
(END)