Sherman also highlighted the importance of the Indo-Pacific region, noting it is home to more than half of the global population and over 60 percent of the global economy.

"The United States is a proud Indo-Pacific nation. Our future is entwined more closely with the Indo-Pacific than with any other part of the world," the deputy secretary said in a House Foreign Services Committee hearing on restoring American leadership in the Indo-Pacific.

"Our vision -- a vision we share with our Allies and partners across the region -- is to ensure the Indo-Pacific remains free and open, and becomes more interconnected, prosperous, secure, and resilient," she added. 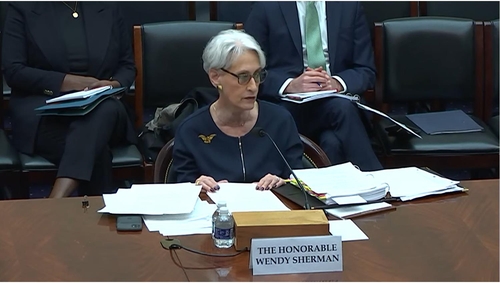 To this end, the U.S. is working to strengthen its alliances and partnerships with other countries in the region, she noted.

"America's network of alliances and partnerships is one of our greatest strengths. That is why we are prioritizing strengthening our collaboration in a variety of forums," said Sherman. "We elevated the Quad, created AUKUS, appointed a Special Presidential Envoy to lead our COFA negotiations with the Freely Associated States, and reinvigorated trilateral diplomacy with Japan and the Republic of Korea."

Sherman underscored growing threats to peace and security in the region.

"Threats to our security are evolving, and our security approach must evolve with them. We are strengthening and deepening our five treaty alliances and other vital partnerships across the Indo-Pacific and working to enhance our capabilities," she said.

The remarks come after North Korea fired its first intercontinental ballistic missile in over four years on March 24.

"The transition team for President-elect Yoon of South Korea is here, and this is very much up in part of their discussions with everyone with whom they have met, which is to ensure that we take some strong action to let the North know that they can't just keep doing this without any consequences, that we take actions that show we have a credible deterrence against any attack by North Korea," she said, referring to the U.S.-South Korea policy consultation delegation sent by President-elect Yoon Suk-yeol.

The deputy secretary expressed hopes that the U.S.-South Korea alliance will be further strengthened under South Korea's incoming administration when asked.

"I think that President-elect Yoon in South Korea will be a terrific partner and ally of the United States," she said.