SEOUL, April 7 (Yonhap) -- President-elect Yoon Suk-yeol vowed Thursday to strengthen deterrence against North Korea's nuclear and missile threats during a visit to a U.S. military base, his spokesperson said.

Yoon flew by helicopter to Camp Humphreys in Pyeongtaek, 70 kilometers south of Seoul, amid heightened tensions in the wake of North Korea's test-firing of an intercontinental ballistic missile last month and concern Pyongyang could carry out a nuclear test. 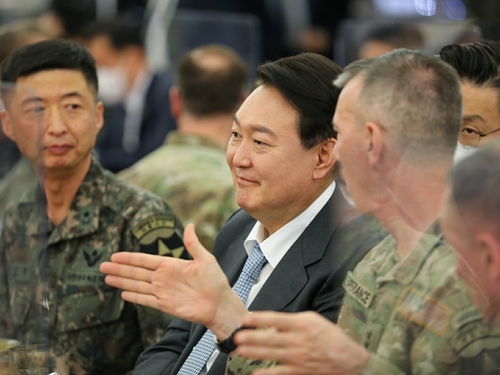 Bae said Yoon "stated his determination to further increase the solidarity of the South Korea-U.S. alliance and strengthen deterrence and the response posture against North Korea's nuclear and missile threats."

The base, located some 70 kilometers south of Seoul, serves as the headquarters of the 28,500-strong U.S. Forces Korea (USFK) and the U.S.-led U.N. Command. 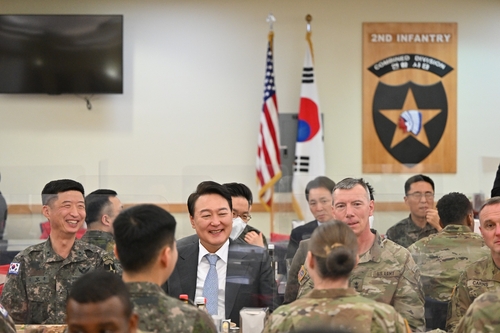 "The freedom and prosperity the Republic of Korea enjoys today were made possible by the dedication and sacrifice of the numerous soldiers gone before us," he said as he thanked the troops under LaCamera's command.

LaCamera responded that it would be a dereliction of duty to not do everything to bring stability to the Korean Peninsula, Bae said. He emphasized the importance of the "iron-clad alliance" and thanked the South Korean people for making the construction of the base possible.

The CFC is currently in the process of relocating to Camp Humphreys from Yongsan in Seoul, the same area that Yoon is pushing to move the presidential office to.

Past presidents-elect, including Park Geun-hye, Lee Myung-bak and Roh Moo-hyun, visited the CFC in Yongsan but not the base in Pyeongtaek.

Yoon called Camp Humphreys the "heart of the South Korea-U.S. military alliance" and noted that it was his first visit to a military base since his election.

After touring the facilities, he shared a meal with South Korean and American troops at the canteen and took photos with them before returning to Seoul Air Base, just south of the capital, Bae said.

In a press release later, the USFK said Gen. LaCamera provided Yoon with an overview of his commands' "ironclad" commitment to strengthening the bilateral alliance and providing a "robust" combined defense posture for peace on the Korean Peninsula.

It also noted Yoon conversed with American and South Korean troops about their responsibility to defend South Korea "against any threat or adversary."

On his way to the base, the spokesperson said Yoon got an aerial view of the Samsung semiconductor plant in Pyeongtaek and took special interest in its vast facilities, saying he will push to elevate the country's high-tech industries to a world-class level. 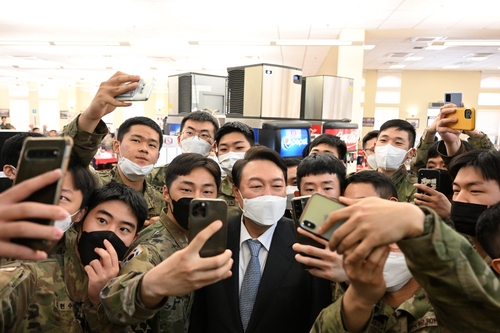 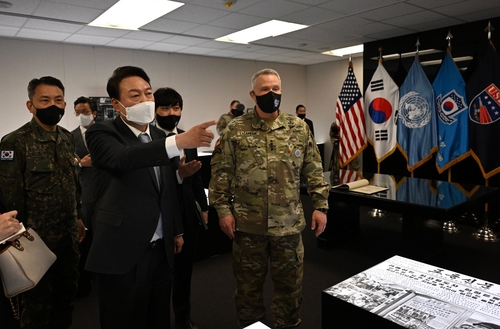