SEOUL, April 8 (Yonhap) -- Prime Minister nominee Han Duck-soo said Friday he will explain the allegations of conflicts of interest related to his home in the upcoming confirmation hearing.

"I submitted explanatory materials and data (on personal assets). All of my explanations may not be accepted but I think (confirmation hearing) members will understand it well if I faithfully explain," Han told reporters on his way to the office. 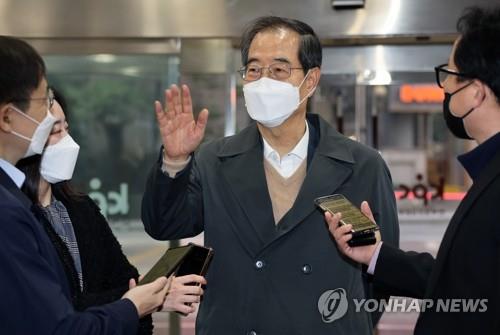 Han's conflict of interest allegations center on his house being rented to local affiliates of two U.S. companies pursuing business interests in the South Korean market in the 1990s when he was serving in high-ranking government positions in the trade sector.

According to the prime minister nominee's office, Han rented his three-story house in the central Seoul ward of Jongno to American telecom giant AT&T and Mobil Oil Korea, a subsidiary of American global oil refiner Mobil (now Exxon Mobil), from 1989 to 1999.

Notably, the register record shows Mobil Oil Korea secured the right to collateral security for Han's home with the maximum credit amount of 169.9 million won (US$139,000) in September 1995.

At that time, Han served as vice trade minister and trade minister after a stint as a presidential secretary for trade affairs, triggering allegations of conflicts of interest related to his housing rental. Some Democratic Party lawmakers have raised suspicion that Han may have used his public positions for private gains.

Han was also asked about several billions of won being transferred to his time deposit accounts last year but said the transactions were due to the difference in interest rates between banks.

Han, who was picked by President-elect Yoon Suk-yeol as prime minister nominee on Sunday, has separately come under fire for receiving about 1.8 billion won for four years in the early 2000s as an adviser to law firm Kim & Chang that represented the scandal-hit U.S. private equity firm Lone Star.