SEOUL, April 10 (Yonhap) -- K-pop supergroup BTS has said it was disappointing to fall short of winning a prize at the Grammy Awards for the second consecutive year, but the band will never give up.

"I was so eager to win a Grammy that I was really disappointed," member Jimin told Korean reporters at Allegiant Stadium in Las Vegas, an hour before taking the stage for its second live concert there Saturday night (U.S. time).

"As a Korean, I was curious about how far our music could reach, and I thought it would be a reward to our fans if we received an award," he said.

The septet, which performed at the 64th Grammy Awards ceremony held in the same U.S. city Sunday night, was nominated for best pop duo or group performance for the second consecutive year, for its megahit single "Butter," raising expectations it would become the first Korean singer or group ever to win a Grammy.

The Doja Cat-SZA duo, however, took this year's honor with their hit song, "Kiss Me More." 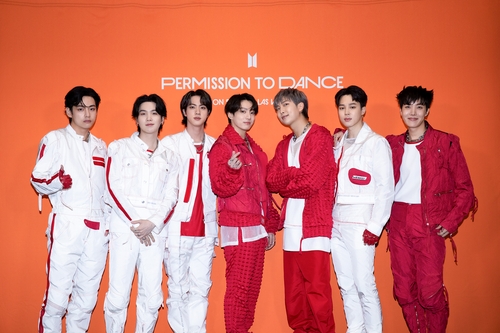 J-Hope said he was able to easily concede the result when someone else's name was called out but realized at that moment how much he wanted the prize. "It was very regrettable," he recalled.

But Jin said: "This year won't be our last chance, but we can try anytime we want in the future. So, we'll do our best."

The band kicked off the sold-out "Permission to Dance on Stage -- Las Vegas" concerts on Friday and will have three more shows on Saturday and April 15-16, respectively.

When asked how they felt about their first-ever concerts in Las Vegas, Suga said it was a new experience because the MGM Resorts rendered support for not only the shows but also various cultural experiences that fans could have.

"It was fortunate that we came here," he added.

Band leader RM said he thinks the city of Las Vegas excites people like they are in an amusement park, being associated with such expressions as "exciting," "playing" and "forgetting."

"When I performed, I found the spectators were all in a good mood," he said.

He also said the band is working on a new song but refused to give further details, including when it will be released. 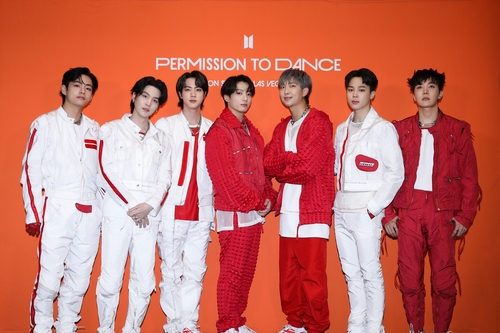 Earlier in the day, Hybe, the K-pop powerhouse behind BTS, said during a press conference in the U.S. city that Jin, the oldest member of the group who faces enlistment by December of this year, has entrusted issues related to his military duty to the company and urged the parliament to conclude the issue as soon as possible.

A bill that would allow prominent male pop celebrities to substitute their mandatory active-duty service for other alternate programs has been pending at the National Assembly amid allegations that BTS, arguably the most accomplished K-pop group in terms of global success, should be exempted from military service or given other favors for its role in promoting the nation's image overseas.

All able-bodied South Korean men are required to serve in the military for about two years. But exemptions have been granted to international award-winning athletes and classical musicians for their roles in elevating the country's reputation overseas.

Jin confirmed he entrusted the company with the issue during the meeting with reporters.

"I talked a lot about the issue with the company and decided to entrust it to the company as much as possible," he said. "So I can say what the company said is what I said."