SEOUL, April 10 (Yonhap) -- A 65,000-seat stadium in Las Vegas, the flashiest city in the world, was filled with purple lights when K-pop superstars BTS took to the stage for a live concert Saturday night (U.S. time).

Fans cheered with thunderous shouts as the band members appeared on stage in white and red costumes for the second of its four live concerts in the U.S. city.

The band opened the show singing and dancing to its hit song "On" in perfect sync and then further heated up the mood by performing "Fire" and "Dope" in a series. 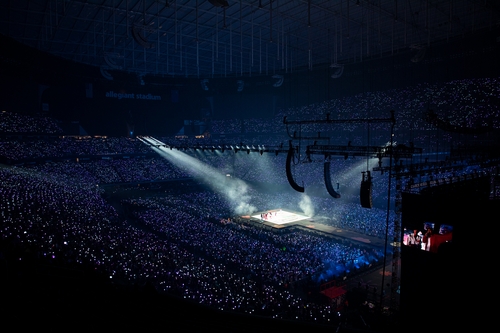 As soon as J-Hope chanted the word, "Scream," after asking fans to show how loudly they can scream, the around 50,000 spectators who filled the Allegiant Stadium shouted their lungs out.

There was a huge LED screen and a T-shaped stage placed inside the stadium, with the rest of the space, except for the back of the screen, filled with purple lights from LED wands, known as ARMY bombs. ARMY refers to the group's global fandom, and purple is its official color.

Other members seemed to be doing their best dancing so fans could not feel the vacancy of the injured member.

When he sang the group's megahit single "Butter," Jin stood up and danced to the rhythm of the music. 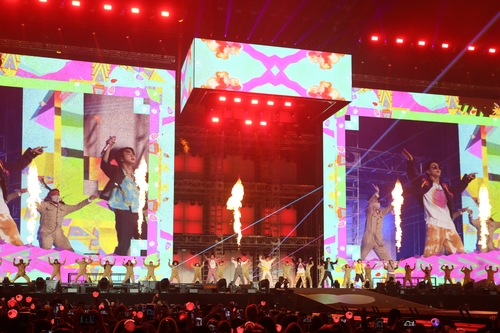 The setlist consists of songs that all seven members can sing together with no individual songs included.

The group's global hits, such as "Butter," "Dynamite" and "Boy With Luv," were performed in newly arranged versions.

Fans reacted to every move by members, waving high signs reading "If we are together, the desert becomes the sea" and "I love you." One fan cheered, holding high a sign reading "2022 ARMY's Awards" apparently to console the band for its repeated failure to win at the Grammys.

The band performed "Permission to Dance" during the finale of the show. 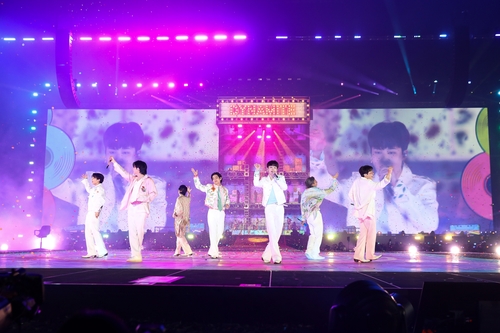 "If I hear your voice, dance while making eye contact and enjoy like this, I won't wish to do anything at all in the future," Jimin said.

Calling fans a "battery," Jin shouted, "I love you ARMY, who makes us move!"

After six days of pause, BTS will hold two more shows on April 15 and 16 at the same venue, with the final-day show set to be streamed live online. 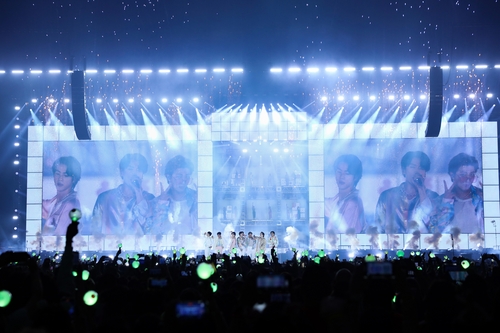