Weber reportedly died at his residence in Maryland on Saturday (local time).

During the war, Weber served as a member of the 187th Airborne Regimental Combat Team and joined key missions, including the Incheon Landing Operation, to repel North Korean invaders. He lost his right arm and right leg in a battle in Wonju, 132 kilometers east of Seoul, in 1951.

After retirement, Weber devoted his life to ensuring the world never forgets the Korean War.

He has advocated for the establishment of monuments honoring Korea War veterans, including the "Wall of Remembrance" in Washington that carries the names of American servicemen and Korean Augmentation Troops to the U.S. Army who lost their lives in the war.

In honor of his fearless service during the war, Weber was included among the 19 steel soldiers set up at the Korean War Veterans Memorial in Washington.

President-elect Yoon Suk-yeol's delegation, including Pyo Se-woo, former defense attache at the South Korean Embassy in Washington, visited Weber before his passing. It later expressed condolences to his bereaved family. 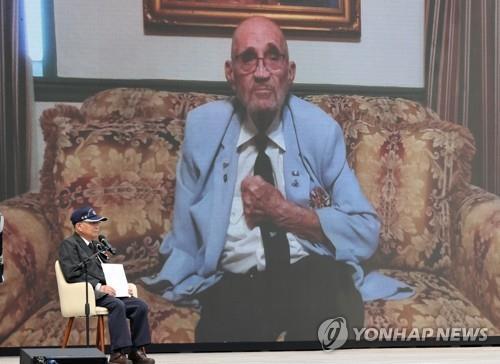