SEOUL, April 11 (Yonhap) -- Prosecutor General Kim Oh-soo on Monday publicly opposed the ruling Democratic Party's push to deprive the prosecution of its investigative power, saying he will have no reason to remain in the job if the proposed reform is realized.

The DP has been pushing for what it calls a "complete deprivation of the prosecutorial investigative right" as part of efforts to reform the powerful law enforcement agency that has long been accused of abusing its power for political purposes.

Ahead of the inauguration of President-elect Yoon Suk-yeol on May 10, the liberal party is widely seen as quickening steps to complete its reform centered on weakening the state prosecution and eventually stripping it of its authority to investigate.

"There will no longer be any meaning in me carrying out my duties as prosecutor general if the prosecution's investigative power is abolished," Kim said during opening remarks at a meeting of the chiefs of regional prosecution offices held to oppose the reform.

"I will not cling to my post, nor will I evade any responsibilities," he said.

Kim also claimed that abolishing the prosecution's investigative power will compromise the country's ability to respond to serious crimes.

"Changing the criminal justice procedures overnight may bring extreme chaos ... a revision of important systems like this needs sufficient prior discussion, based on public understanding," he said.

"The Supreme Prosecutors Office and I will carry out our do-or-die efforts, based on the opinions of prosecutors, to safeguard the (current) criminal justice procedures for the people," Kim added.

After the meeting, regional prosecution chiefs voiced objection to the reform push and formally requested the formation of a parliamentary committee to collect opinions from experts and find "reasonable" prosecution reform measures, officials said.

In a first reform measure, the prosecution was forced to give up the investigative right for all but six major crimes, including corruption and election crimes, last year, with police and the newly established Corruption Investigation Office for High-ranking Officials taking over other investigations.

The DP, which holds 172 seats in the 300-member National Assembly, is set to hold a plenary party meeting Tuesday to determine the timing of a legislative bid on removing the prosecution's investigative power entirely and leaving it only with the authority to prosecute. 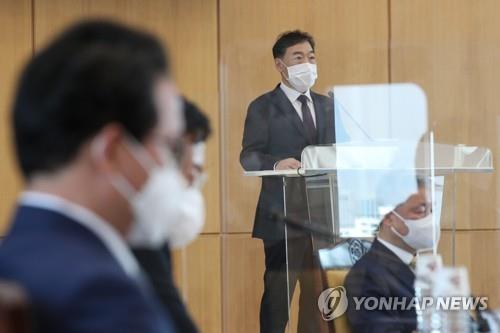