SEOUL, April 11 (Yonhap) -- Defense Minister-designate Lee Jong-sup said Monday that a military without training has "no reason to exist," in a sign of his policy priority on reinforcing combined exercises with the United States.

Lee, a retired three-star general, made the remarks amid expectations that the incoming administration of President-elect Yoon Suk-yeol could bolster the allied training scaled down under the current liberal Moon Jae-in government's push for diplomacy with North Korea.

"A military that does not train has no reason to exist," Lee told reporters as he appeared at his office for the first time in central Seoul to prepare for a parliamentary confirmation hearing.

Lee underscored the need to establish conditions for the military to engage in training, which he cast as its "basic mission."

To facilitate engagement with a recalcitrant Pyongyang, Seoul and Washington have scaled down their field training, though lower-level drills have continued to take place regularly.

But Yoon's campaign slogan of "peace through strength" in the midst of North Korea's missile launches has raised speculation that the allies could move to scale up their combined drills down the road.

Asked if he would discuss with Washington the idea of deploying U.S. strategic military assets here to deter North Korean provocations, Lee said a decision will depend on the North's future course of action.

"We have to devise additional measures to deter additional threats depending on how North Korea would move," he said.

"As I was designated for the defense minister post at such a grave juncture, I feel a greater sense of responsibility than at any other time," he said.

A ministerial nominee is subject to a parliamentary hearing. But his appointment does not require the National Assembly's endorsement.

Lee graduated from the Korea Military Academy and had served as the Joint Chiefs of Staff (JCS) vice chairman from 2017 to 2018.

On the previous day, Yoon said he had chosen Lee as he is expected to "establish firm security and a strong defense power while achieving close cooperation with our ally." The Yoon administration will kick off on May 10. 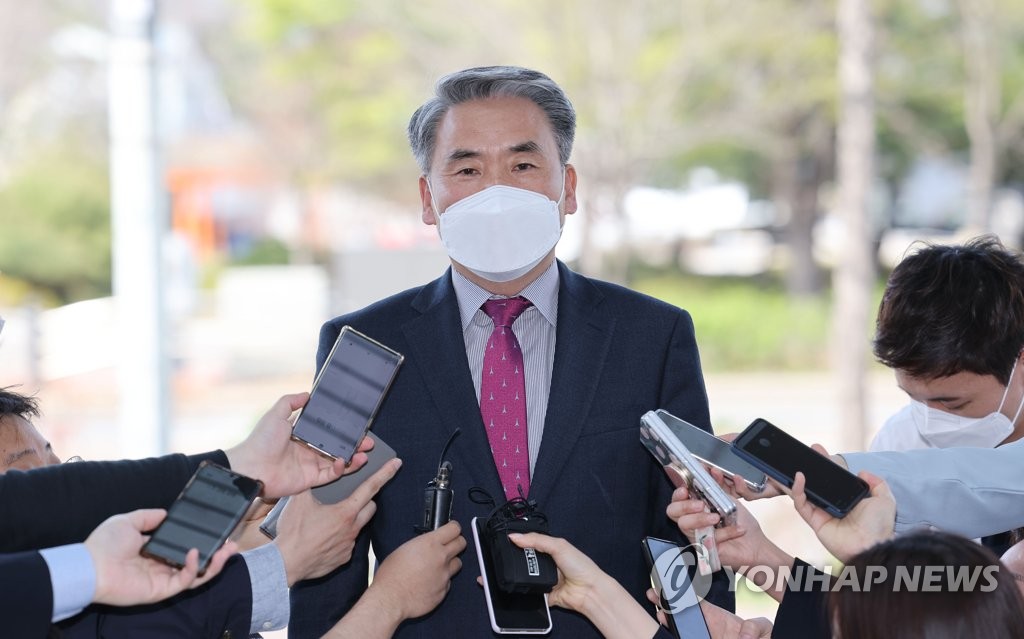