Investors have been wary of the Federal Reserve's warnings of faster-than-expected belt-tightening to curb inflation, which have stoked fears of slowing global economic growth.

High inflation in China is also another source of concern.

Earlier in the day, China said its producer price index surged 8.3 percent on-year in March and the consumer price index grew 1.5 percent, both higher than expected.

The high prices came amid the lockdown in Shanghai for more than two weeks over soaring virus cases. The antivirus curbs have been feared to further disrupt global supply chains, and affect the Chinese and the global economy.

"Uncertainties over inflation have continued both in the U.S. and Chinese markets. Investors appear to have taken a cautious stance also ahead of the Bank of Korea's rate-setting meeting this week and the full-fledged corporate earning season," NH Investment & Securities analyst Kim Young-hwan said.

In Seoul, tech, battery and bio shares lost ground to drag down the index.

The local currency closed at 1,233.1 won against the U.S. dollar, down 8.0 won from the previous session's close.

Bond prices, which move inversely to yields, closed lower. The yield on three-year Treasurys rose 19.9 basis points to 3.186 percent, and the return on the benchmark five-year government bond added 18.7 basis points to 3.303 percent. 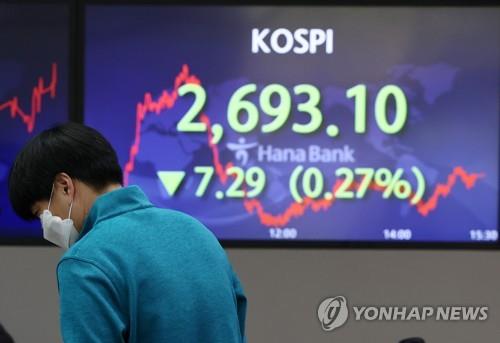