SEOUL, April 11 (Yonhap) -- Onew, leader and lead vocalist of popular K-pop group SHINee, said Monday that "diversity" is the keyword that best represents his latest album to be released after more than three years of hiatus as an individual artist.

"I wanted to show that Onew is a person who can do not only calm songs, such as ballads or drama soundtracks, but also can dance and try something new," he said during an online press conference to promote the new EP "Dice." "In a word, it is 'diversity.'"

It marks the first release from the artist following his first individual EP "Voice" in December 2018.

The album consists of six tracks, including "Sunshine," a cheerful electronic pop song; "On the Way" featuring a combination of dreamlike sounds and guitar ad-libs; "Love Phobia," which depicts contradictory feelings of wanting eternal love; and "In the Whale," in which Onew was listed as a lyricist.

The title track "Dice" is a pop song that features a combination of rhythmical flux guitar and refreshing synth sounds. Its lyrics are about a man who is willing to bet everything on his loved one even though he knows it is a losing game. 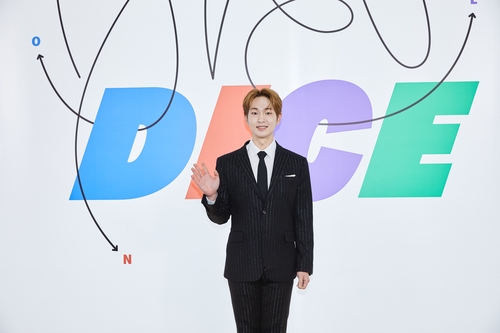 Onew said the album contains a wide spectrum of songs, ranging from a refreshing song to a romantic song and to a song that feels lonely.

"Since it has many songs with hopeful and good lyrics, I think it would be fun if you listen to the songs while matching them to your personal experiences."

The 32-year-old singer debuted as a member of the popular quintet in 2008. He has also been working as an actor and an individual artist not only as a group member, appearing in the 2016 smash-hit Korean drama "Descendants of the Sun" and various stage musicals.

"It was a huge burden to fill the stage alone as an artist," he recalled. "The hardest part was that I couldn't stop singing since I had to sing from the start to the end. So I practiced singing live a lot."

When asked about his ultimate goal, he answered he wants to be a singer who provides hope and is influential.

"What I keep thinking about these days is hope," he said. "I wanted to convey hope and a message of happiness to many people. I hope to be a singer who has a strong influence (on others)."