SEOUL, April 12 (Yonhap) -- A U.S. nuclear-powered aircraft carrier has entered the international waters of the East Sea, informed sources said Tuesday, in an apparent show of America's military might amid concerns over possible North Korean provocations.

The USS Abraham Lincoln strike group is currently in waters east of South Korea's southeastern city of Ulsan -- the first such maneuvers in the waters since late 2017, when tensions remained high due to Pyongyang's saber-rattling.

The carrier group is expected to be in the East Sea for three to five days, the sources said.

The U.S. Naval Institute also confirmed on its website that the carrier strike group is in the East Sea.

Speculation has persisted that the North could engage in provocative acts like the launch of an intercontinental ballistic missile (ICBM) or a nuclear test in time for its major political events later this month. 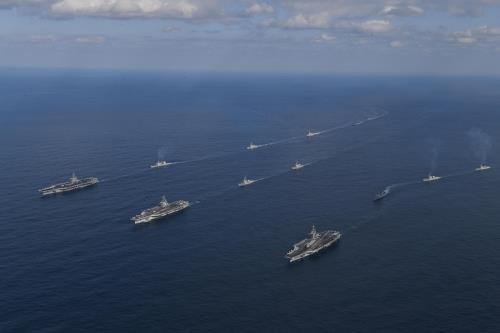