Le Sserafim will drop the debut EP "Fearless" and hold a showcase for fans at the Jangchung Arena, an indoor sports stadium that can house 4,000 people, on May 2, Source Music said. The showcase will also be livestreamed online, it added.

Le Sserafim is a six-piece group that consists of Miyawaki Sakura, Kim Chaewon, Huh Yunjin, Kazuha, Kim Garam and Hong Eunchae. The first two are ex-members of the now-disbanded girl group IZ*ONE, while Huh was a contestant on the TV survival show "Produce 48."

The group's name is an anagram for "I'm Fearless," according to the agency.

Hybe Chairman Bang Si-hyuk, who is the mastermind behind BTS, and the company's creative director Kim Sung-hyun participated in the production of the album. 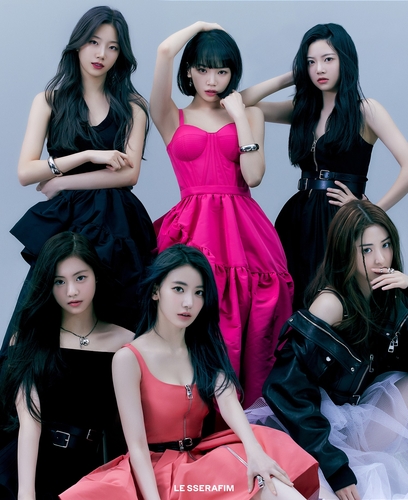