"The company should sincerely respond to our demand," the unionists said at a press conference in front of Lee's residence in Yongsan, central Seoul, threatening a walkout if their demand for bigger wages and better working conditions is not met.

Samsung's unionized workers have called on the company to offer an annual salary rise of 10 million won (US$8,155) per employee, fully disclose its incentive system and abolish its peak wage system, which gradually reduces salaries for senior workers several years before retirement, among other things. 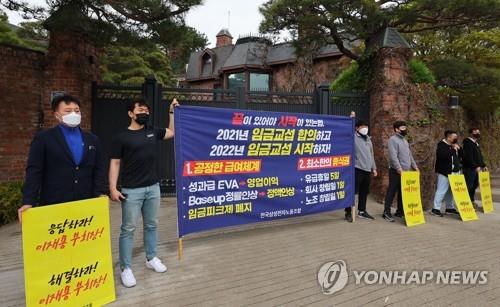 The two parties have so far held 15 rounds of negotiations since October but failed to iron out differences despite arbitration efforts by the National Labor Relations Commission.

If they go on strike as warned, it would mark the first of its kind since the company's foundation in 1969.

Around 4 percent of Samsung's 110,000 workers are said to be unionized.

"Since the state arbitration efforts stopped last year, our repeated demand for resuming negotiations has gone unanswered," Son Woo-mok from the union said. "We want Vice Chairman Lee to step in to help resume the wage negotiation."

Lee Hyun-kuk, another member from the union, said staging a protest in front of Lee's resident was a "last resort" as a CEO could not settle the issue.

In March, Samsung's co-CEO Kyung Kye-hyun met with the labor union to seek a breakthrough in their stalled talks. But the meeting did not hammer out solutions.

The labor union said it will stage a daily protest until an agreement is reached.