The 11-piece group will kick off the tour titled "The Boyz World Tour: The B-Zone" in Los Angeles on May 29, IST Entertainment said.

It will mark the band's first live concerts in front of overseas fans in about two years and five months after a tour of major European cities such as Berlin and Paris in 2019. But the boys have never had a bigger tour of North America and Europe.

After Los Angeles, the band will perform in five other U.S. cities, including Chicago and Newark, before moving to Europe for shows in four major cities such as London and Rotterdam.

Seoul will be the tour's last stop with the band set to hold four concerts at KSPO Dome on Aug. 5-7.

The group debuted in 2017 and rose to fame by finishing first place in Mnet's music competition program "Road to Kingdom" in 2020 where it competed against other boy bands like Pentagon, Golden Child and ONF.

It is scheduled to drop its second Japanese EP, "She's the Boss" on May 27. 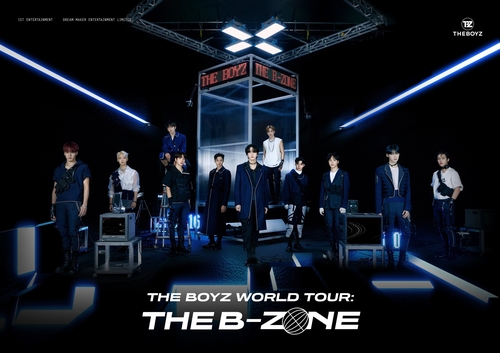 The Boyz to launch first world tour next month

The Boyz to launch first world tour next month