SEOUL, April 14 (Yonhap) -- Health and Welfare Minister nominee Chung Ho-young has come under fire over allegations surrounding his children's admissions into a medical school in the southeastern city of Daegu years ago. 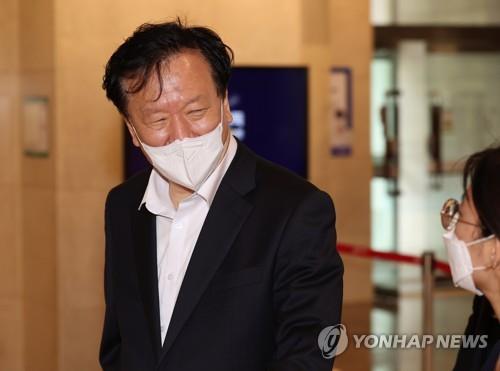 Chung's son was also admitted to the same medical school under its transfer admission program for bachelor degree holders the following year, when the nominee was head of the same university hospital.

Rep. Kim Won-i of the DP said Chung's children participated in volunteer work at the university hospital before applying for the medical school's transfer admission and stated those activities in their application forms.

Chung's daughter stated in her application paper that she carried out volunteer activities, such as transport of patients, on 20 occasions for 70 hours in January and July 2016, according to the lawmaker.

Chung's son also claimed to have taken part in similar volunteer activities at the same university hospital on 25 occasions for 85 hours between January 2015 and July 2016, the lawmaker said, adding the records of volunteer work were reflected in the document screening for applicants.

Chung's daughter passed the Kyungpook medical school's transfer admission screening through a 10.24-to-1 competition in December 2016, when she was attending Seoul National University's College of Agriculture and Life Sciences.

Chung's son also applied for transfer admission into the Kyungpook medical school after obtaining a bachelor's degree in electronic engineering at the same Daegu university.

Chung's office has denied allegations about the admission process, saying the nominee's children were admitted to the medical school in accordance with the due application guidelines without committing any irregularities.

It also said the minister nominee will give a detailed explanation on the matter in his parliamentary confirmation hearing.