Seoul's Joint Chiefs of Staff Chairman Gen. Won In-choul and Gen. Paul LaCamera, the head of the South Korea-U.S. Combined Forces Command, met aboard the USS Abraham Lincoln carrier that arrived in the waters earlier this week in a show of America's military might.

Their symbolic meeting came amid speculation that the North could engage in provocative acts, like another intercontinental ballistic missile launch or a nuclear test, in time for its key political events, including the 110th birthday of its late national founder Kim Il-sung on Friday. 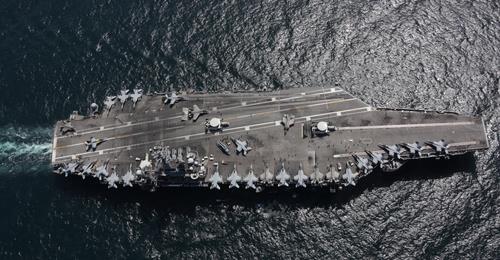 It marks the first such carrier maneuvers of the U.S. Navy in the East Sea since late 2017, when tensions soared due to a string of Pyongyang's major provocations, including its sixth nuclear experiment.