SEOUL, April 14 (Yonhap) -- Samsung Electronics Co. and its union on Thursday resumed their wage talks that have been suspended for three months due to their difference over wages and other labor issues.

During the meeting, representatives of the South Korean tech giant's management suggested giving three days of annual paid leave, which can be used after using 15 days of annual mandatory leave.

Such benefits will only be applicable to members of the union, accounting for around 4 percent of Samsung's 110,000 workers.

"The union is reviewing the suggestion, yet it is still far insufficient compared to the level that the union has so far demanded," said a union official who asked not to be named. 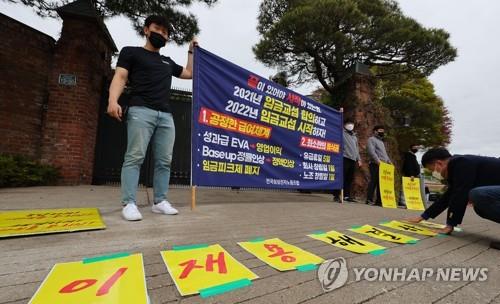 The two parties earlier held 15 rounds of negotiations since October but failed to iron out differences despite arbitration efforts by the National Labor Relations Commission.

It was the first wage negotiations since Lee Jae-yong, the leader of Samsung Group, in May 2020 vowed to abolish the conglomerate's long-standing practice of not allowing labor unions.

Samsung's unionized workers have called on the company to offer an annual salary rise of 10 million won (US$8,155) per employee, fully disclose its incentive system and abolish its peak wage system, which gradually reduces salaries for senior workers several years before retirement, among other things.

They have also demanded Lee come to the negotiating table.

The two sides will return to the negotiation table Friday.
(END)