The new weapon system is "of great significance in drastically improving the firepower of the frontline long-range artillery units and enhancing the efficiency in the operation of tactical nukes of the DPRK and diversification of their firepower missions," the official Korean Central News Agency (KCNA) said. The DPRK is the acronym for the North's official name, the Democratic People's Republic of Korea.

"The test-fire was carried out successfully," it added without giving other details of the tested weapon, including its type.

South Korea's military said later that it detected the North's launch of two projectiles into the East Sea at 6 p.m. Saturday. They flew 110 kilometers at an apogee of around 25 km and a top speed of Mach 4, it added.

Immediately after the launch, the presidential National Security Office, military and intelligence agencies held an emergency meeting to discuss it, according to the Joint Chiefs of Staff. 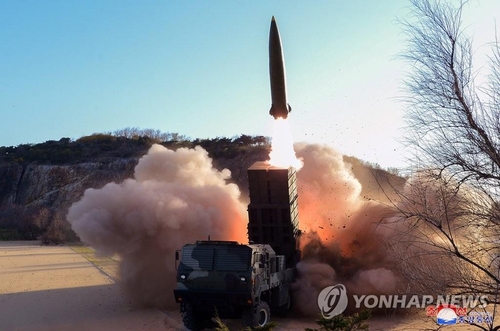 Observers here say the North seems to have tested a newly developed heavy artillery system or upgraded KN-23 missiles -- its own version of the U.S.' Army Tactical Missile System (ATACMS).

Photos released by the KCNA show that the transporter erector launcher (TEL) has two tubes, while the tactical weapon itself bears an external resemblance to the KN-23 missile, modeled after Russia's Iskander ballistic missile. The North might have modified the missile to be fit for multiple TEL tubes.

The KN-23 is known to have a flight range of 400 to 600 km that can target South Korea. Rather than following a general parabolic trajectory, the missile shows a more complicated path by doing a so-called pull-up maneuver over the course of its flight.

Inspecting the latest launch, Kim gave important instructions on "further building up the defense capabilities and nuclear combat forces of the country," the KCNA reported.

Kim highly praised the national defense scientific research sector for its "continuous successes in attaining the core goals of securing the war deterrent" set forth at the eighth party congress last year.

He then clarified that the long-term plan for the ruling party's central committee is to bolster up the defense capabilities of the country. 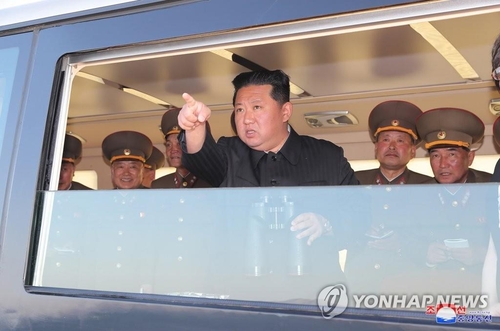 During the Workers' Party congress in January last year, the North laid out plans to advance its weapons, including developing tactical nuclear weapons, hypersonic gliding flight warheads, nuclear-powered submarines and reconnaissance satellites, among others.

The North's latest test-launch comes as South Korea and the United States prepare to kick off their major springtime combined training on Monday. Concerns have grown that Pyongyang may conduct another nuclear test in the near future.

It marks the country's 13th known flight test of projectiles this year, and the first since Pyongyang fired what it claims to be a Hwasong-17 intercontinental ballistic missile (ICBM) last month.

On Friday, the North also commemorated the 110th birth anniversary of its founder Kim Il-sung with massive celebratory events, but there has been no report of a military parade.