SEOUL, April 18 (Yonhap) -- Sales of equity-linked securities (ELS) in South Korea declined by more than half in the first quarter from three months earlier amid the coronavirus pandemic, data showed Monday.

The total value of ELS products stood at 12.4 trillion won (US$10.1 billion) in the January-March period, down 51.8 percent from the previous quarter, according to the data from the Korea Securities Depository. The tally is also down 36 percent from the same period a year earlier.

ELS refers to hybrid securities whose returns are linked to the performance of underlying equities, including a stock index.

In the first quarter, the global surge of COVID-19 cases weighed on investors' appetite for risky assets around the world, leading to losses in major stock indexes. Uncertainties over the Russia-Ukraine war and the U.S. Federal Reserve's policy tightening added to the losses. 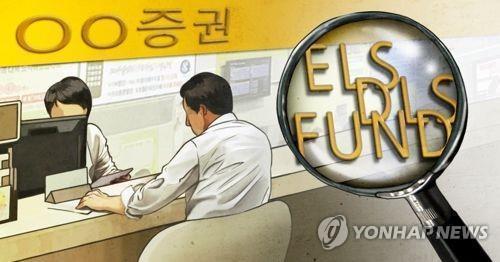 ELS products worth 7.7 trillion won were redeemed in the three-month period, falling 62.4 percent from the previous quarter and down 68.6 percent from a year earlier.

The outstanding value of ELS products amounted to 62 trillion won as of end-March, adding 7.6 percent from three months earlier and 11.2 percent from a year earlier.

ELS sales in S. Korea decline by more than half in Q1

ELS sales in S. Korea decline by more than half in Q1