SEOUL, April 18 (Yonhap) -- President Moon Jae-in agreed to meet with Prosecutor General Kim Oh-soo on Monday after turning down the resignation offer Kim submitted in protest of the ruling Democratic Party's push to strip the prosecution of its investigative powers, an official said.

Kim tendered his resignation on Sunday in protest of the DP's push for legislation that would leave the prosecution with no authority to conduct investigations on its own, as part of efforts to reform the powerful agency that has long been accused of abusing its power for political and other purposes. 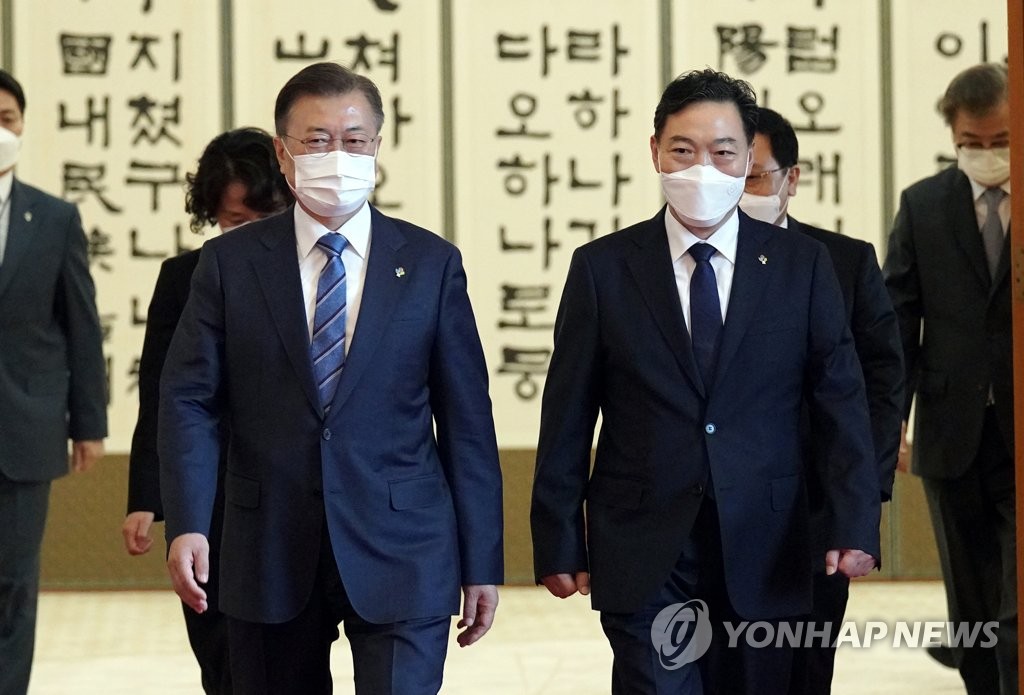 Before offering to resign, Kim had earlier requested a meeting with Moon, though no meeting took place.

On Monday, presidential spokesperson Park Kyung-mee said Moon decided to turn down Kim's resignation and instead meet with him later in the day.

A presidential official explained that Moon did not accept the resignation because the prosecutor general's term is guaranteed and because he wants to hear Kim's opinions as the head of the executive branch.

Kim, who was appointed by Moon, has more than a year left in his two-year term. His resignation offer came less than a month before Moon is set to leave office at the end of his five-year term.

Moon's decision is seen as an attempt to stop the row between the prosecution and his party from escalating.

Under his administration, the prosecution's investigations have been reduced to six categories of crimes, with the rest being assigned to the police and the newly established Corruption Investigation Office for High-ranking Officials.

After Kim requested a meeting with the president last week, a Cheong Wa Dae official suggested the issue should be discussed with the National Assembly, saying, "Now is the time for legislation."

DP Rep. Park Ju-min, chairman of a subcommittee under the parliamentary legislation and judiciary committee, convened a subcommittee meeting for 7 p.m. Monday to begin deliberations on the proposed revisions to the Prosecutor's Office Act and the Criminal Procedure Act.

The DP's aim is to pass both amendments during April's parliamentary session and promulgate them into law during the Moon administration's last Cabinet meeting on May 3.

"If we don't get it passed in April, we believe we won't get another chance in the future," Park Hong-keun, the DP floor leader, told reporters Monday.

"Everything has to align, from a government that won't exercise its veto, to the number of parliamentary seats that will enable passage through the National Assembly," he said.

"Directly forwarding a bill (to a subcommittee) is not in line with procedures," PPP Rep. Yoo Sang-bum, a ranking member of the legislation committee, told Yonhap News Agency by phone. "I'm furious at the way the Democratic Party is taking steps to ram it through."