SMEs' overseas shipments stood at US$30.4 billion in the January-March period, up 13.9 percent from a year earlier, according to the data from the Ministry of SMEs and Startups.

It marks the highest first-quarter amount since related data tracking began in 2010. It was the second-highest quarterly tally after the $31.5 billion recorded in the last quarter of 2021. 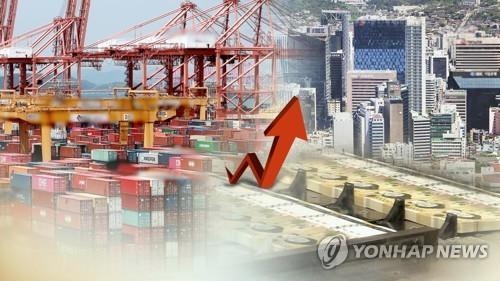 The strong first-quarter performance came amid a recovery in the global economy in spite of the prolonged coronavirus outbreak.

By product, exports of plastic products increased 6.2 percent on-year to $1.34 billion in the three-month period, with those of pharmaceuticals surging 12.3 percent to $1.34 billion.

Overseas shipments of auto parts edged up 0.6 percent to $1.09 billion, while exports of cosmetics goods sank 9 percent to $1.12 billion due to sluggish shipments to China.

Exports to China rose 5.3 percent on-year to $5.72 billion, and overseas shipments to the United States came to $4.45 billion.

Local SMEs' shipments to Ukraine, meanwhile, plunged 44.1 percent on-year to $37 million in the first quarter due to Russia's attack on the country, with exports to Russia rising 2.7 percent to $560 million.

Online exports amounted to $160 million in the first quarter, up 37.1 percent from a year earlier, according to the data.
(END)