SEOUL, April 18 (Yonhap) -- In 2020, the Toronto Blue Jays' South Korean starting pitcher Ryu Hyun-jin ranked third in the American League (AL) Cy Young Award voting, a season after finishing as the runner-up for the top pitching prize in the National League (NL) as a member of the Los Angeles Dodgers.

And while he didn't look to be quite the same, efficient pitcher in the first half of 2021, Ryu still had his moments. In four out of his 20 starts through July -- not counting the abbreviated one on April 25 when he was taken out early with an injury -- Ryu didn't give up any earned runs. In total, he held opponents to two or fewer earned runs in 12 of those 20 outings. 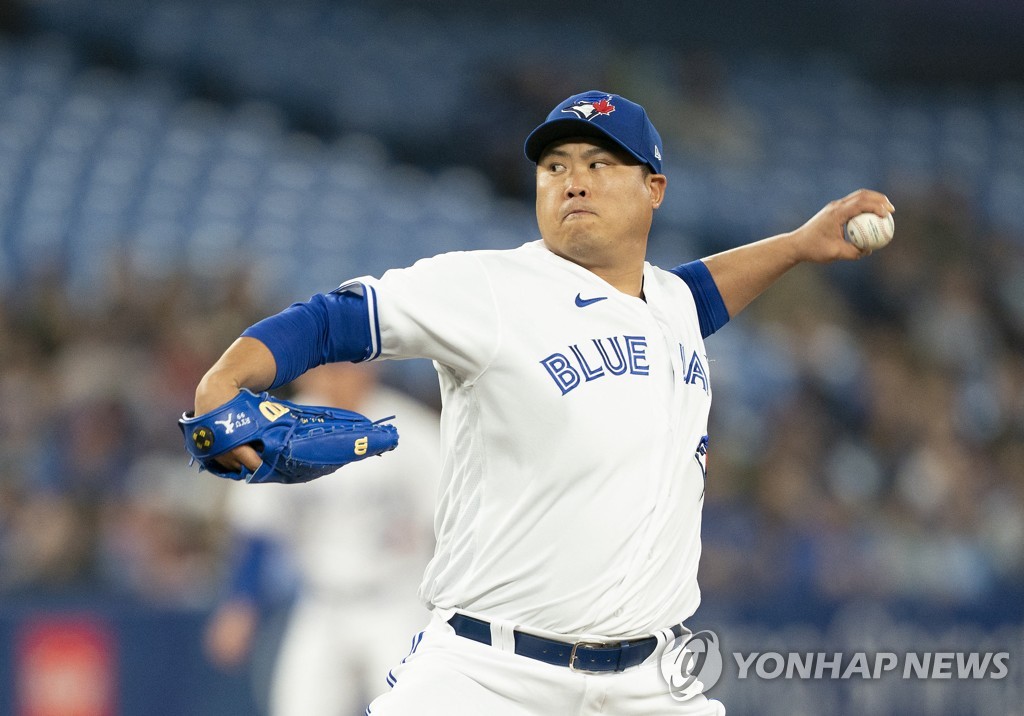 Then the wheels came off in August, and the concerning downward trend continued into 2022 before the Blue Jays placed Ryu on the 10-day injured list (IL) with left forearm inflammation. There's no timetable for his return.

Ryu has the worst ERA in the majors since Aug. 8 with 8.27. That date may seem arbitrary, but that was when Ryu was roughed up for seven earned runs on 10 hits, both season highs, in 3 2/3 innings against the Boston Red Sox.

He allowed at least seven earned runs in two more starts last year. He posted a 6.21 ERA in six August starts and then a 7.78 ERA in five September starts.

Ryu, 35, stumbled out of the gate to begin the 2022 season, Year 3 of his four-year, US$80 million contract. He surrendered six runs on five hits in 3 1/3 innings against the Texas Rangers in his season debut on April 10. The Blue Jays gave Ryu an extra day of rest and sent him out against the underwhelming Oakland Athletics on Saturday. Ryu had traditionally pitched well with additional time off, but he still gave up five runs on six hits in four innings this time. He reported forearm pains afterward and was placed on the IL.

So how did Ryu, the crafty lefty who started the All-Star Game in 2019 and led the majors in ERA that same year, get to this point?

In sum, opponents are hitting the ball harder off Ryu than before, and Ryu is not missing as many bats as he once did. 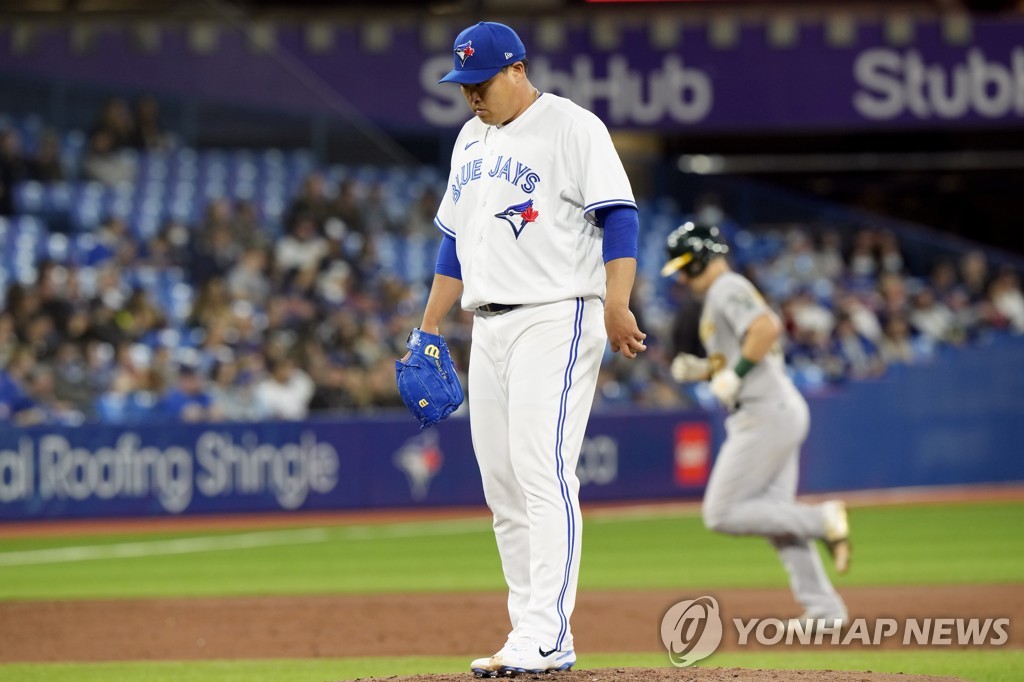 Ryu has long been able to compensate for his lack of velocity with his pitch sequence and command, working the corners with changeups and cutters while messing up hitters' timing with fastballs just in the right spots. The margin for error for a finesse pitcher like Ryu is always slim, and it has become even more so since last summer as Ryu began losing his way around the strike zone.

That has led to some hard contact. According to Statcast, Ryu allowed an average exit velocity -- the speed at which the ball leaves the bat -- of 86.6 mph in 2019, which put him in the top 7 percent of the league. In 2021, that number jumped to 89.6 mph, putting Ryu in the bottom third of the competition.

In two starts this year, the average exit velocity reached 91.7 mph. In his season debut against the Rangers, Ryu allowed four consecutive hits in the fourth inning, all of them leaving the bats at over 100 mph.

Statcast also keeps track of "barrels," a designation assigned to well-struck balls where the combination of exit velocity and launch angle leads to a minimum .500 batting average and 1.500 slugging percentage. In simple terms, think of hard-hit balls that end up being extra-base hits.

Ryu allowed 2.2 barrels per plate appearance in 2020, the second lowest in the majors, but the number nearly tripled to 6.3 in 2021, putting him in 71st place. This year he allowed 8.6 barrels in two starts. 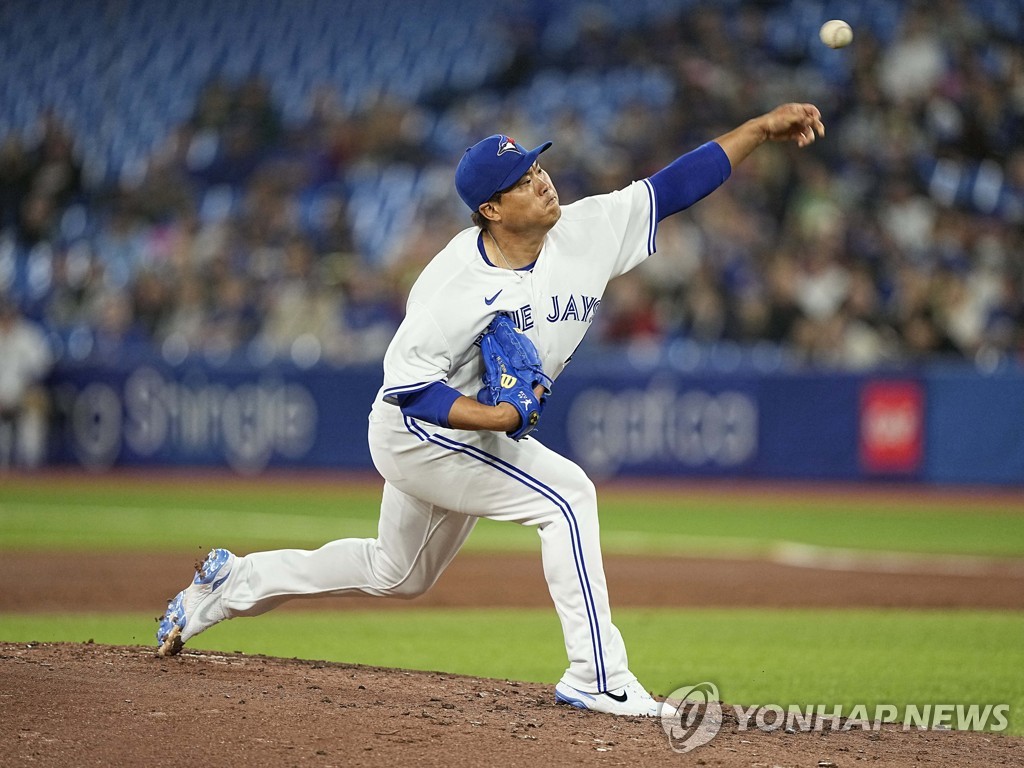 There have not been meaningful dips in his pitch velocity on a year-to-year basis, but hitters have not only been making better contact, but also making more frequent contact.

Dating back to last summer, there have been enough subpar outings to suggest Ryu's struggles aren't merely a blip but a trend. He is not doing as good of a job suppressing hard contact or generating whiffs as before.

Ryu does have a track record of success. But the Blue Jays are a team built to go after a World Series title this year and the immediate future, and they can't afford to wait for a slumping, 35-year-old starter to come around midseason. The leash on Ryu isn't going to be long when he returns from the IL.

The Blue Jays don't lack for alternative starting options either. Ross Stripling, a swingman with major league starting experience, made a spot start in place of Ryu on Friday and tossed four shutout innings. Stripling will now take Ryu's spot in the more conventional, five-man rotation. 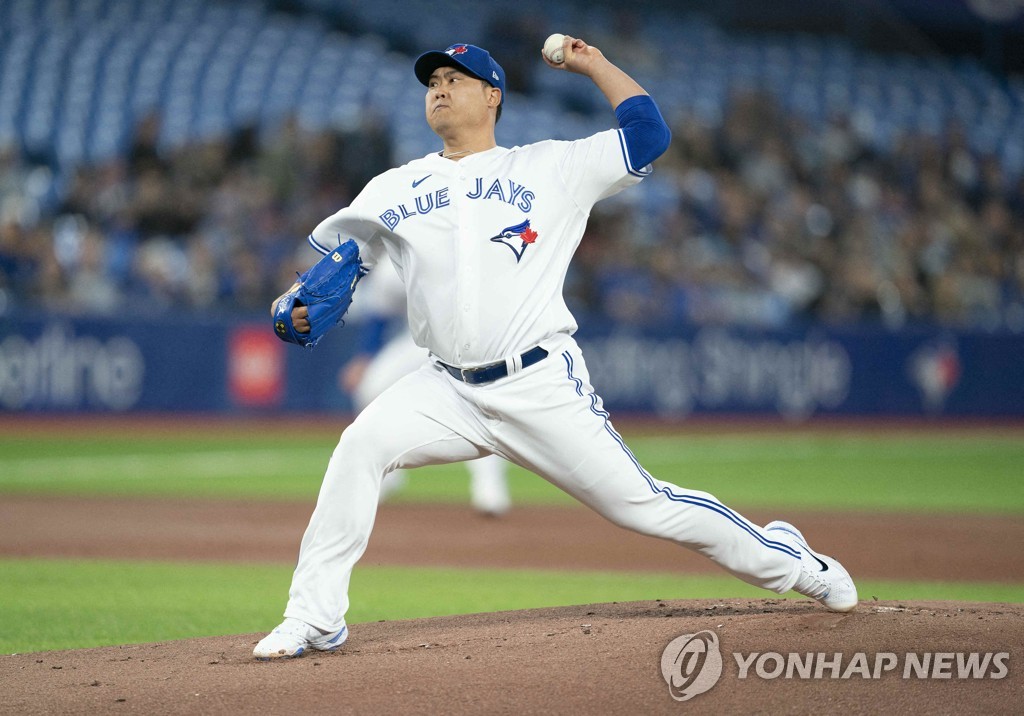 If Ryu misses an extended period of time, the Blue Jays will also want to groom their hard-throwing prospect Nate Pearson to be a big league starter, once he recovers from mononucleosis.

"I'm not here to defend Ryu," Montoyo told reporters. "He struggled with his command and threw too many pitches over the middle of the plate. They made him pay. He's a guy that is really good when he commands all of his pitches. He just hasn't been able to.

"I'm not sitting here and telling you about track records any more," Montoyo added. "He has struggled in his last outings. We're just hoping that he makes an adjustment and finds his command, because that's what it is. His command."