SEOUL, April 19 (Yonhap) -- The office of President-elect Yoon Suk-yeol on Tuesday rejected criticism that a former negotiator on a controversial wartime sexual slavery deal with Japan is included in Yoon's delegation to Tokyo, saying the outgoing government also recognizes the deal as an official agreement.

Yoon plans to send the seven-member delegation to Japan later this month for policy consultations on North Korea and pending bilateral issues, but the delegation sparked criticism from the liberal Democratic Party (DP), as it includes Lee Sang-deok, a former diplomat who negotiated the controversial deal.

The negotiation led to a bilateral agreement inked in December 2015 in which the two countries decided to end the historical feud once and for all.

But the deal fell apart after the Moon Jae-in administration came into office in 2017 and declared the agreement "seriously flawed," as critics took issue with Japan's refusal to admit formal legal responsibility. 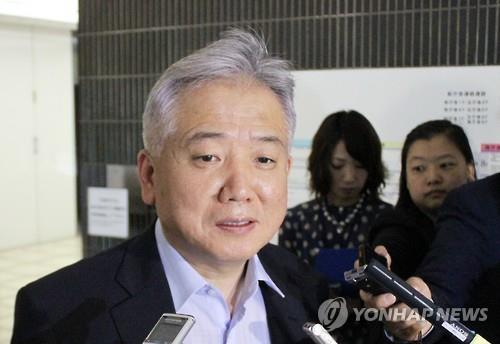 Asked about the criticism from the DP, an official of Yoon's side said the 2015 deal "is recognized by the current administration as an official agreement between governments."

Yoon's delegation to Japan "is consisted of the best experts to establish future-oriented Korea-Japan relations," the official said.

The 2015 deal was not implemented, as the Moon administration said the deal failed to properly reflect victims' opinions, but the outgoing government kept its stance of not breaking it, because it was an official agreement between the two nations.

On Tuesday, some members of the DP stepped up their pressure on Yoon to exclude Lee from the delegation.

A group of DP lawmakers issued a statement, saying Lee should be excluded from the delegation, because he led working-level negotiations for the "humiliating" deal.

The DP lawmakers claimed including Lee into the delegation "could result in sending a wrong diplomatic signal to Japan" and Tokyo may try to ask Seoul to refrain from criticizing Japan over the issue.

Yoon's side refutes criticism about delegation to Japan

Yoon's side refutes criticism about delegation to Japan