SEOUL, April 20 (Yonhap) -- North Korea appears to be making final-stage preparations for a military parade involving a large number of troops ahead of another key anniversary next week, according to satellite imagery reported by U.S. news outlets Wednesday.

The area is known as the secretive North's traditional parade training venue with the replica of Kim Il Sung Square, where such an event highlighted by goose-stepping soldiers and a show of major weapon systems is actually staged. The satellite imagery was taken on Sunday, a week before the North celebrates the 90th founding anniversary of the North Korean People's Revolutionary Army (KPRA), the anti-Japanese guerrilla force.

What is noteworthy is a large crowd spotted at Kim Il-sung Square in central Pyongyang, which indicates that the North's parade preparatory work is in the last stage.

Many people were seen there, with makeshift tents set up on April 17-18, RFA said.

The Voice of America also carried a report based on satellite photos taken on April 17-18 that show a large crowd of people making formations with red flowers at the square.

The imagery showed a parking space northwest of the parade training ground of the airport packed with vehicles, it added.

South Korea's military and intelligence authorities are paying attention to the odds of a massive parade around next Monday. They do not rule out the possibility of a nighttime event.

An informed source in Seoul expected the North to mobilize more than 20,000 troops for a parade this time, with tracked vehicles like armored cars and transporter erector launchers (TELs) already on the move.

On the weekend, the North test-fired what it claims to be a new tactical guided weapon.

Last Friday, Pyongyang celebrated the 110th birth anniversary of its late founder Kim Il-sung with fireworks and a mass dance performance but without staging a military parade.

Meanwhile, the Los Angeles-class fast-attack submarine USS Alexandria (SSN 757) arrived at Yokosuka, Japan, on Monday in yet another display of America's military might, according to a U.S. Navy photo posted on the Defense Visual Information Distribution Service.

The arrival came after the USS Abraham Lincoln carrier strike group engaged in a naval exercise with Japan in the East Sea last week amid growing concerns about the possibility of North Korean provocations. 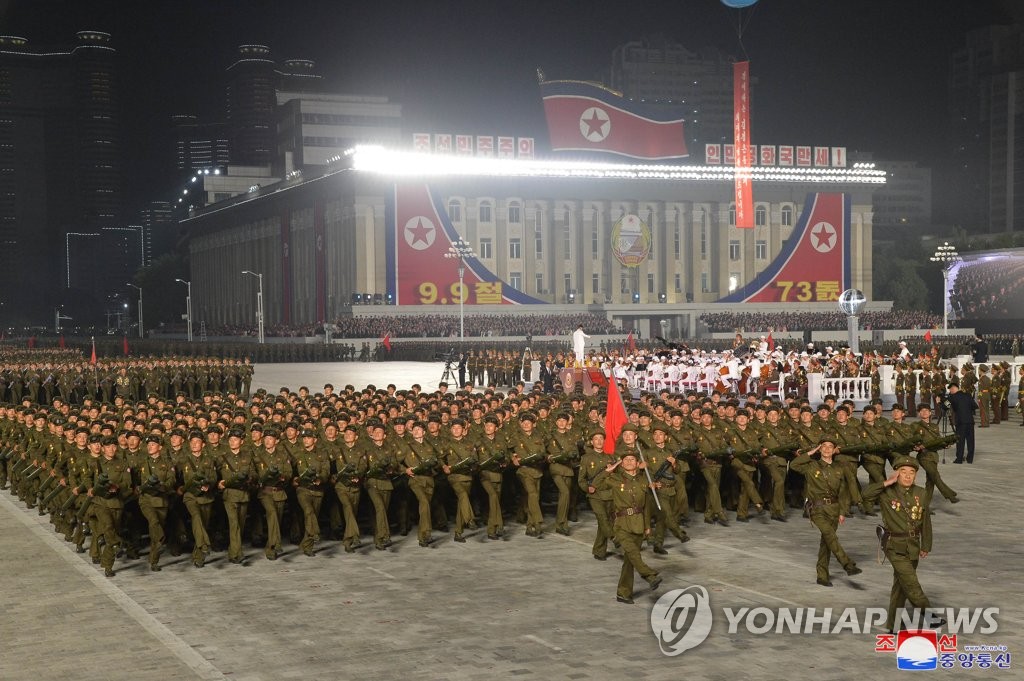