Biden has widely been expected to visit South Korea before or after he travels to Japan to attend a Quadrilateral Security Dialogue meeting around May 24.

Sources said May 20-22 emerged as the likely dates of his visit during talks between officials in Seoul and Washington.

"I believe the U.S. is planning the visit with the aim of newly strengthening the alliance relationship with South Korea," one source said. 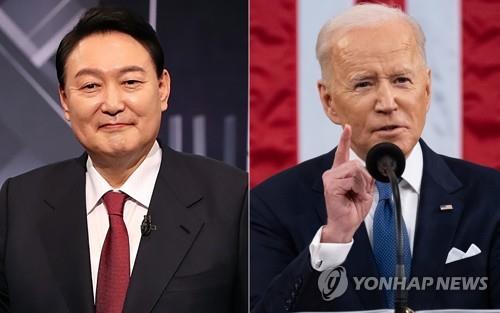 Details are still being set up, including the time of day Biden will arrive in Seoul and the summit venue, as Yoon will have relocated the presidential office out of Cheong Wa Dae and into what is now the defense ministry compound.

A U.S. advance team is expected to arrive in Seoul this weekend to look at possible venues.

Potential summit sites currently include the MND Convention, a facility used for weddings and banquets adjacent to the defense ministry, and the nearby National Museum of Korea.

Yoon's chief of staff Chang Je-won acknowledged the two countries are in talks over the dates of Biden's visit.

"We're not at the stage of making any announcements. Nothing's been decided," he told reporters.

The summit is set to become the earliest-ever South Korea-U.S. summit to take place following a South Korean president's inauguration. Yoon will take office May 10.

Biden likely to visit S. Korea from May 20-22: sources

Biden likely to visit S. Korea from May 20-22: sources