Loosely based on a real-life gang turf war, "The Outlaws" starring Ma garnered a total of 6.8 million people to become the third most-watched R-rated movie in South Korea. Directed by Lee Sang-yong, the sequel is set in Vietnam four years after Detective Ma Seok-do (Ma) swept a group of ruthless Chinese gangsters in Seoul in the first installment. The cop teams up with his old friends again to catch a ruthless criminal, named Kang Hae-sang, who commits crimes, like kidnapping and murder against tourists, for several years in the Southeast Asian region.

"'The Roundup' is made on a bigger scale than the first one," Ma said in an online press conference. "It is full of more attractive characters and more forceful narrative."

The actor, known for playing tough and violent though likable characters in films like "Train to Busan" (2016), said he had newly learned judo to perform robustly entertaining action sequences in the new film. He was last seen on the big screen as the superhero Gilgamesh in Marvel's "Eternals" (2021).

"My action is based on boxing as I've learned boxing for a long time," he said. "This time, I needed some skills based on judo. So I learned the martial arts for this project."

Ma, who also participated in "The Roundup" project as a producer, said he tried not to repeat the plot and characters of the first movie, which gained huge popularity, in telling follow-up stories.

"As 'The Outlaws' and 'The Roundup' are based on reality, I looked for many crime cases and gave a fresh twist to adapt them into the movie," he said. "We're now working on another sequel to 'The Roundup.' We're trying to come up with fresh ideas in the series." Actor Son Seok-koo, who had taken roles of gentle, romantic characters in the romantic comedy film "Romance Without Love" (2021), the political TV series "Designated Survivor: 60 Days" (2019) and the rom-com "Be Melodramatic" (2019), plays the main villain, Hae-sang.

"This is my first character that fights. I gained weight and trained some action pieces for the role," he said. "I did not try to create a totally new character from Jang Chen. But I just strived to be myself and do my best." 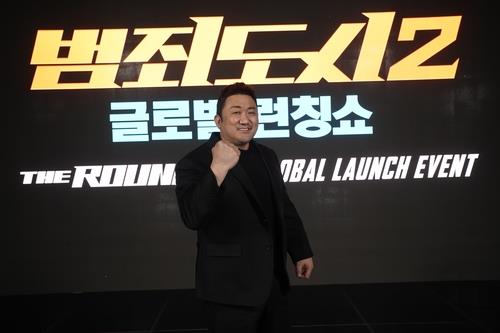 Director Lee, who worked as an assistant director on "The Outlaws," said he is pleased to present his first directorial debut filmed in the middle of the COVID-19 pandemic.

"Due to the pandemic, our filming schedule has been disrupted so many times," he said. "So many things have happened over the past three years. Thanks to the cooperation of the crew and cast members, I could complete this project and the film is now set to be shown to the public."

"The Roundup" will hit local screens on May 18.