TOKYO, April 25 (Yonhap) -- South Korean President-elect Yoon Suk-yeol's delegation had a meeting with Japan's top diplomat Monday and the two sides agreed on the need to strengthen cooperation between the neighboring countries, the head of the team said.

The seven-member delegation, led by Rep. Chung Jin-suk of Yoon's conservative People Power Party, arrived in Tokyo the previous day for a five-day stay two weeks ahead of his inauguration. 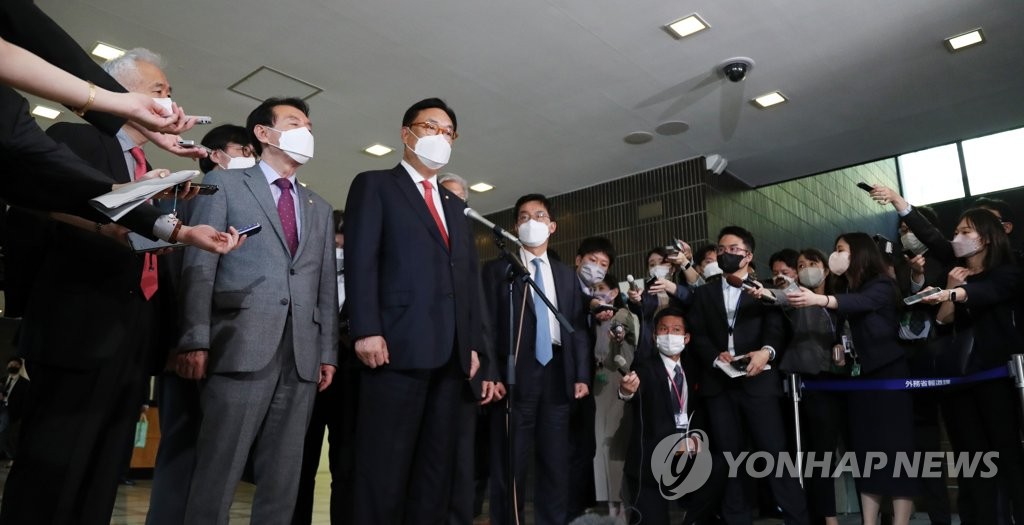 "As good neighbors that share the value of free democracy and open economy as well as future tasks, (we) agreed to closely maintain and strengthen bilateral relations," he added.

During the meeting, Yoon's team gave a briefing on the new administration's policy direction on Japan, but did not discuss a specific proposal related to such high-profile matters as wartime forced labor and sexual enslavement of Korean women, he added.

"(The two countries) will have to make efforts to reach a conclusion (on the issues) through in-depth dialogue and negotiations via official diplomatic channels," he said, referring to the long-running sources of friction between Seoul and Tokyo.

On the possibility of formally inviting Prime Minister Fumio Kishida to attend Yoon's inauguration ceremony slated for May 10, Chung said South Korean officials are ready to warmly welcome and host him if he decides to do so.

"Though the two nations have pending issues, including export curbs, we proposed that Seoul and Tokyo wisely work together to build a mutually beneficial relationship from a new start line," Chung told reporters.

He said the two sides plan to continue constructive discussions at working levels.

The delegation plans to attend a dinner reception hosted by Hayashi at his official residence later in the day.