SEOUL, April 25 (Yonhap) -- The new chief of South Korea's central bank said Monday he is more concerned about inflation than momentum for economic growth "up until today" but more data is needed to determine whether to push for a further interest rate hike next month.

The Bank of Korea (BOK) hiked its policy rate by a quarter percentage point in mid-April, the fourth rate increase since August last year, as it is striving to tame inflation after it kept borrowing costs at record lows to bolster the pandemic-hit economy. The BOK is to hold its next rate-setting meeting in late May.

"When deciding the April rate hike, more emphasis was placed on inflation than on growth," BOK Gov. Rhee Chang-yong said during a press meeting just days after his inauguration. "Though I need to read more data, there are more concerns over inflation up until today."

"The trend of normalizing monetary policy will continue going forward, but the decision on its speed should be determined based on analysis of (more) data," he added.

Since his nomination last month, Rhee, a former director at the Washington-based International Monetary Fund (IMF), has been signaling he might emphasize growth over rising inflation pressure amid worries recent steep rate increases could undermine the momentum of an economic rebound from the pandemic.

South Korea's economy has been on a recovery path on the back of robust exports and improving private spending. But uncertainty is growing at home and abroad due to the fast spread of the omicron variant and surging fuel prices caused by the Ukraine conflict.

Last week, the IMF cut its growth projection for South Korea's economy to 2.5 percent this year from a 3 percent rise predicted in March. The forecast is lower than the BOK's estimate of 3 percent.

In his inauguration speech Thursday, Rhee underlined the need to strike a "delicate" balance in carrying out monetary policy, as the "trade-off" between economic growth and fighting inflation will restrict its room for policy maneuvering.

In Monday's press meeting, Rhee cited the upcoming rate decision that the U.S. Federal Reserve will make early in May as one of the major events that could have significant repercussions on the BOK's rate decision to be made weeks later.

Market watchers are expecting the Fed will raise its rate at a faster pace than anticipated to tamp down surging inflation.

"Some are talking about a 50 basis point increase. If that's so or if it's higher than that, we need to monitor capital outflows or the movement of the local currency," Rhee said.

With regard to the won's marked fall against the U.S. dollar, Rhee said the local currency's depreciation "has not been as serious as" the euro and other currencies, though the downward trend will likely persist given the U.S. central bank is on track to hiking interest rates.

Rhee said that he wants to be "dovish" in the longer term to prop up the economy that could get come growing pressure from the aging population and other structural issues.

"From a longer-term perspective, I want to make efforts to prevent growth rates from falling too much, generate jobs and enhance the quality of life by boosting productivity through restructuring and nurturing of creativity, even if the aging population continues," he said. 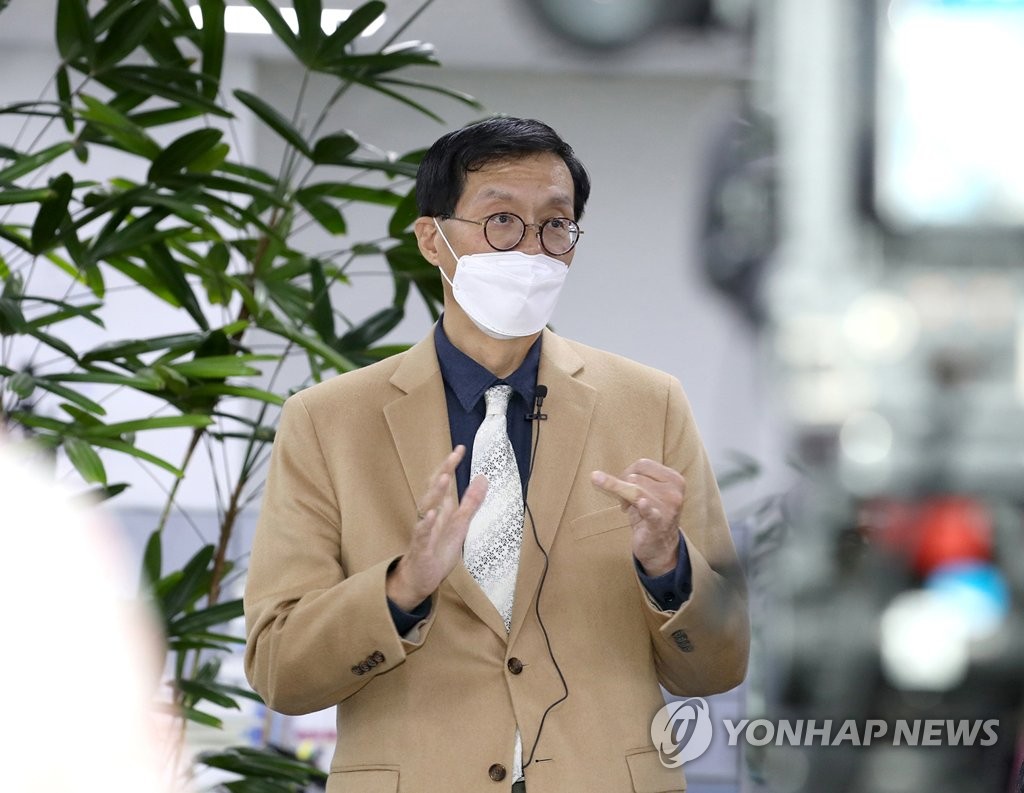