(ATTN: UPDATES with delegation's meeting with industry officials in paras 13-14)

Rep. Chung Jin-suk of Yoon's People Power Party briefed media on the outcome of its meeting with Kishida at the premier's residence in Tokyo.

During the 25-minute meeting, Yoon's delegation delivered to Kishida the incoming president's handwritten letter encapsulating his hope for forward-looking relations with Japan, according to Chung.

"We have shared the view that both South Korea and Japan, which now stand on a new starting line, should make efforts for the future-oriented development of relations and for shared interests," Chung told reporters. 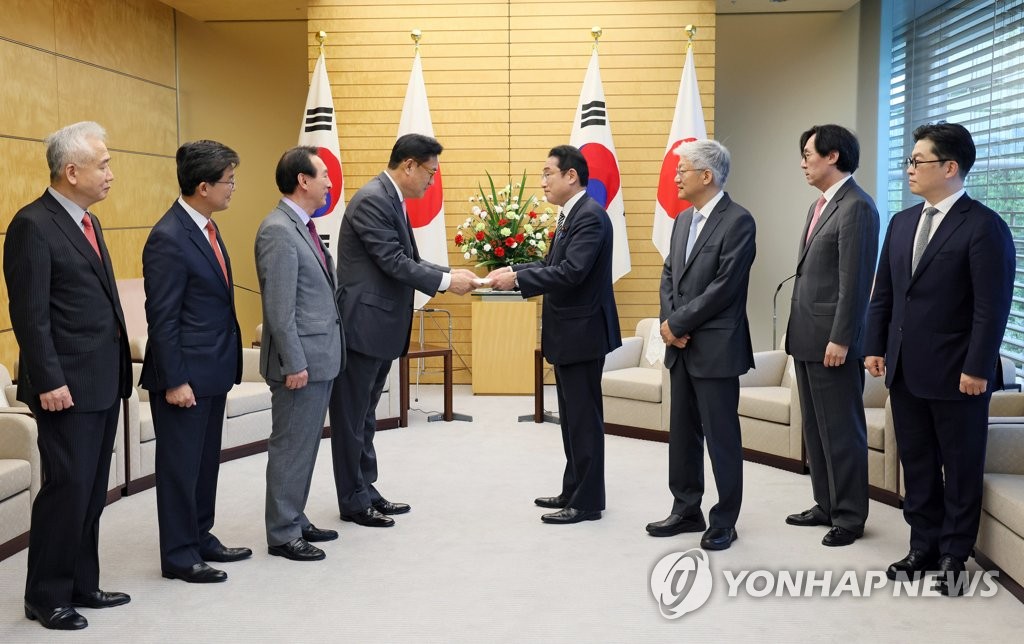 Yoon's letter includes his desire to pursue a forward-looking partnership with Japan while facing up to shared history -- a stance enshrined in a 1998 declaration between then South Korean President Kim Dae-jung and then Japanese Prime Minister Keizo Obuchi, Chung added.

"The Japanese prime minister also shared the understanding on the idea of inheriting and furthering the spirit of the Kim-Obuchi declaration," Chung said

Chung, however, stressed the need to restore trust between the two countries.

"To that end, we relayed our view on the need to expand and revitalize people-to-people exchanges suspended due to COVID-19 and other reasons ... and Prime Minister Kishida shared that view," he said.

During the talks, the two sides also touched on the long-simmering issues of Japan's wartime sexual slavery and forced labor in broad generalities.

Those issues have remained major thorns in bilateral relations, as Tokyo has demanded Seoul should first present measures to address the issues.

Japan claims that the forced labor issue has been already settled under a 1965 treaty aimed at normalizing bilateral relations, while the sexual slavery conundrum was addressed under a 2015 government-to-government deal.

In a separate meeting with Japanese industry officials, the delegation underscored the need for Tokyo to lift its 2019 export curbs on South Korea, which were seen as a retaliation against a 2018 Seoul court ruling on forced labor.

"The export regulations are causing negative effects on both nations," Chung said, referring to Japan's export curbs on some critical materials for semiconductors and displays.

Yoon's seven-member delegation arrived in Japan on Sunday for "policy consultations" with Japanese officials ahead of the launch of the new administration May 10.
(END)