Suga has also participated in the writing of the lyrics, composition and arrangement of "That That," according to P Nation.

"At first I was very nervous because he is many years my senior and someone who is so well- respected in the business," Suga said in a short interview about their collaboration, which Psy posted online. "But I felt like working with a childhood friend, so it made the songwriting process that much more fun. We became besties in a way."

In response, Psy said, "If he thinks of me as a bestie, that's great for me."

He said when he meets younger artists, he always doesn't want to make them feel uncomfortable and be someone who is hard to approach.

"Suga wasn't just my junior in the business but also he truly feels like a friend. It was hard to feel any age gap," he added.

The 12-track album will hit music stores Friday at 6 p.m. to become the first release from Psy since his eighth full-length album in May 2017. The upcoming LP features top-tier singers, such as Sung Si-kyung, Heize, Crush, Tablo and Hwasa of girl group Mamamoo. 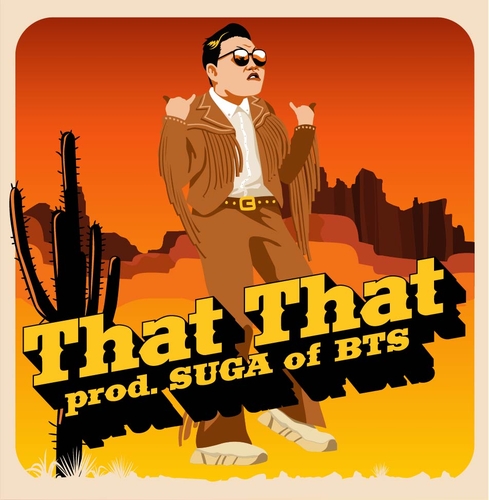