(ATTN: UPDATES with denial of allegations by minister nominee in last 3 paras)

Kim, a former president of Hankuk University of Foreign Studies, was nominated by President-elect Yoon Suk-yeol on April 13 as education minister and deputy prime minister for social affairs apparently due to his expertise in higher education.

Kim received a Fulbright scholarship and served as a visiting professor at Johns Hopkins University of the U.S. from 1996 to 1997. He then served as president of the Korea Fulbright Alumni Association from 2012 to 2015. 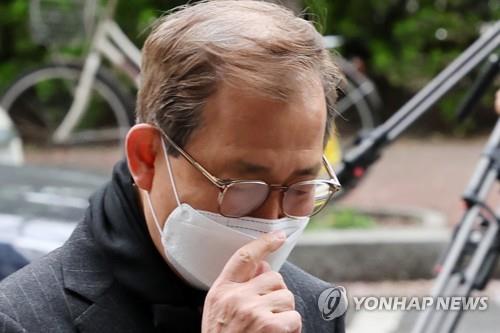 The Fulbright scholarship program is run by the Korean-American Educational Commission, a nonprofit institution jointly sponsored by Seoul and Washington to promote bilateral cultural and educational exchanges.

Rep. Kang Min-jung of the DP revealed that Kim's wife, son and daughter have also received Fulbright scholarships, raising questions about whether any preferential treatment was offered to his family.

In particular, the time when Kim's two children were given Fulbright scholarships roughly coincides with his presidency at the Korea Fulbright Alumni Association, the lawmaker said, calling for a thorough investigation into all suspicions.

The minister nominee's wife received support from the Fulbright program from 2004 to 2005 when she was a professor at Soongsil University in Seoul and went to Temple University of the U.S. as an exchange professor.

The Fulbright scholarship program provides benefits of several tens of millions of won annually, including up to US$40,000 (about 50 million won) in tuition per year and living expenses of $1,300 to $2,410 per month.

The DP lawmaker estimates that the total amount of Fulbright scholarships awarded to Kim's family may amount to between 300 million and 400 million won.

"Only a limited number of South Koreans are selected for the Fulbright scholarship program every year but all of Kim's family members benefited from the program. A thorough investigation is needed to find out whether any irregularities were involved," the lawmaker said.

"Continuing to raise questions about the process by which the minister nominee's family members were selected as beneficiaries of (Fulbright) scholarships simply because he headed the Korea Fulbright Alumni Association is tantamount to inflating groundless allegations," Kim said in a statement released by his confirmation hearing preparation team.

"Raising groundless suspicions about the international education and exchange program sponsored by the U.S. government for about 60 years since 1960 undermines the fairness and trust of the scholarship program operating in about 160 countries worldwide, including South Korea," he said, insisting his family were "very fairly" selected as scholarship beneficiaries according to due procedures.