Foreigners and institutions offloaded a net 678.7 billion won and 237.7 billion won worth of stocks, respectively, while retail investors bought a net 904.6 billion won.

The index tracked the overnight losses on Wall Street, as investors focused on the U.S. central bank's looming aggressive monetary belt-tightening, and China's lockdown of Shanghai and other major cities over the continued spread of the COVID-19 pandemic.

Last week, Federal Reserve chairman Jerome Powell said he sees the need to move "a little more quickly" in terms of raising interest rates to bring down inflation, and a 50 basis points hike is possible next month. 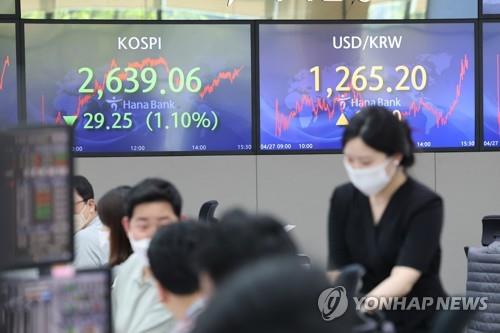 Most top-cap shares on the Seoul bourse lost ground, with tech and financials leading the fall.

Battery maker LG Energy Solution, the second most valuable company on the KOSPI, declined 1.3 percent to 418,000 won as the 90-day lockup period for allotted shares from its initial public offering ended in the day. It made the stock market debut in January.

But bio shares gathered ground after the incoming government vowed to nurture the sector as a future growth engine.

It is the first time in more than two years that the local currency fell to the 1,260 won level.

Bond prices, which move inversely to yields, closed lower. The yield on three-year Treasurys added 6.9 basis points to 2.899 percent and the return on the five-year government bonds rose 3.7 basis points to 3.122 percent.