(ATTN: UPDATES with Yoon's comment on summit in 13th para)
By Lee Haye-ah and Byun Duk-kun

SEOUL/WASHINGTON, April 28 (Yonhap) -- Incoming President Yoon Suk-yeol and U.S. President Joe Biden will hold their first summit in Seoul on May 21 to discuss the alliance between the two countries, North Korea policy, and other regional and international issues, officials said Thursday.

Biden's visit, set for May 20-22, will come only 10 days after Yoon takes office on May 10, and their planned meeting will mark the earliest-ever Korea-U.S. summit to take place following a South Korean president's inauguration.

"President-elect Yoon Suk-yeol plans to hold in-depth discussions with President Biden on a wide range of issues, including developing the South Korea-U.S. alliance and cooperation on North Korea policy, as well as economic security and key regional and international issues," Yoon's spokesperson Bae Hyun-jin said in a statement.

"Through this, we expect a historic turning point will be provided to further develop the two countries' comprehensive strategic alliance," she said.

Biden's visit will mark his first to South Korea since he took office in January last year.

The visit will come as tensions have been running high on the Korean Peninsula in the wake of North Korea's successful test-firing of an intercontinental ballistic missile and concerns Pyongyang could also carry out a nuclear test.

Earlier this week, North Korean leader Kim Jong-un also held a military parade and threatened to proactively use nuclear weapons, rather than possessing them only as a war deterrent, if anyone attempts to violate the country's "fundamental interests." 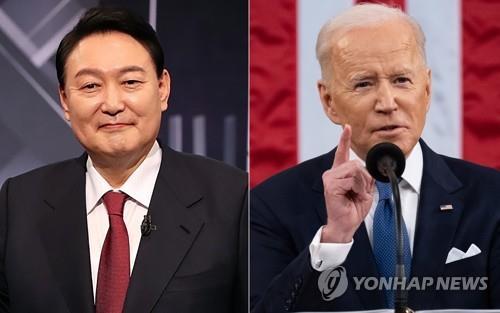 Bae said Yoon welcomed Biden's decision to visit South Korea and that the two countries plan to work closely together through diplomatic channels to ensure a successful visit by the U.S. president.

The transition team will also make full preparations for the visit, she said.

Yoon has made clear his top foreign policy goal is to strengthen the alliance relationship with the U.S.

Biden was the first foreign leader to speak with Yoon after his election on March 9, and early this month the president-elect sent his first policy consultation delegation to Washington with a letter for the U.S. president.

Yoon said Wednesday he believes Biden's visit will be a "good opportunity" for the alliance to be "comprehensively reinforced."

"I expect the upcoming South Korea-U.S. summit to be a timely meeting for close consultations on the South Korea-U.S. alliance, including economic security and science and technology cooperation, at a time when North Korea's nuclear and missile threats and global supply chain anxieties are intensifying," he said Thursday through his spokesperson.

The White House also announced the trip, saying the U.S. president will travel to South Korea and Japan from May 20-24 for summits with both countries' leaders.

"This trip will advance the Biden-Harris Administration's rock-solid commitment to a free and open Indo-Pacific and to U.S. treaty alliances with the Republic of Korea and Japan," White House press secretary Jen Psaki said in a statement.

"The leaders will discuss opportunities to deepen our vital security relationships, enhance economic ties and expand our close cooperation to deliver practical results," she said.

In Tokyo, Biden will also meet with the leaders of the Quadrilateral Security Dialogue (Quad), a U.S.-led security partnership also involving Australia, Japan and India.

Yoon told The Wall Street Journal in a recent interview that he will "positively review joining" Quad if South Korea is invited.

The grouping is seen as aimed at countering China's rise, and South Korea's participation could have far-reaching consequences for diplomatic and economic relations with its biggest trading partner.

During the campaign, Yoon had pledged to increase South Korea's participation in various working groups under Quad.