SEOUL, April 28 (Yonhap) -- South Korea will diversify its import channels of soft coal and increase the production of cement to ease concerns over a supply shortage of the key construction material amid the ongoing crisis surrounding Ukraine, the top economic policymaker said Thursday.

Global supply chains of bituminous coal, or soft coal, used to make cement, have been unstable due to the war in Ukraine, while domestic demand by builders has recently been on the rise.

During an emergency economic response meeting, Finance Minister Hong Nam-ki said the government will continue to seek an increase in bituminous coal imports from Australia to reduce the dependence on Russia.

The government also vowed to speed up the related customs clearance process, while enhancing the monitoring of the supply situation of cement and other major construction materials.

"The government will encourage local companies to expand the production of major construction materials, including cement and rebar. We will also sternly deal with any illegal hoarding and price fixing," Hong said.

Earlier this month, major domestic cement companies vowed to increase their production by 35.7 percent on-quarter for the next three months to 3.88 million tons combined.

In a longer-term plan, the companies plan to reduce their dependence on soft coal to produce cement by using more eco-friendly materials, according to the industry ministry. 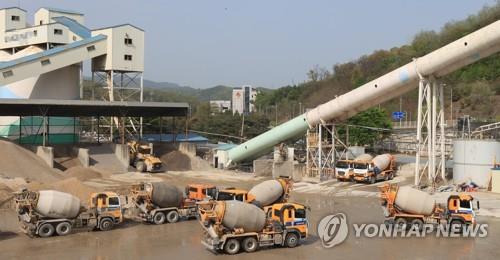