SEOUL, April 28 (Yonhap) -- Bang Si-hyuk, founder and chairman of K-pop powerhouse Hybe that manages BTS, received an honorary doctorate on business administration from Seoul National University (SNU) on Thursday, saying he will work to improve the music industry for the future generation.

"The pandemic was a global catastrophe that threatened the existence of all but a few special industries," Bang said during the conferment ceremony held at the school in southern Seoul, citing disruptions in BTS' world tours and hardships Hybe experienced during its initial public offering.

Bang said his efforts to concentrate on the "essence" of his company, rather than focusing on addressing immediate problems, allowed Hybe to survive, endure and grow during the pandemic.

"(Hybe) will work to survive as we have done until now and study how the future music industry should look like, including the convergence of culture and technology," the 49-year-old music producer said, adding he will also become an entrepreneur who ultimately contributes to the society. 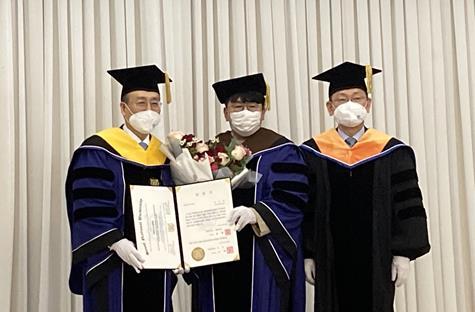 Bang helped the K-pop industry develop into the best entertainment scene across the world, Choi Hae-cheon, dean of the SNU graduate school, said in his recommendation speech, saying he believes Bang's time at SNU had a big influence on his achievement.

SNU plans to create a cultural center to support art activities, hoping to help bring about more figures like Bang, the dean said.

SNU gives honorary doctorate degrees to people who have made special contributions to academic development or improvement of the cultural heritage of mankind.

Bang graduated from SNU, one of South Korea's most prestigious universities, in 1997 and founded the giant entertainment company Hybe, formerly known as Big Hit Entertainment, in 2005.

He is best known for launching the global supergroup BTS in 2013 and co-producing many of the group's hit songs, including "DNA," "Fire," "Fake Love," "Idol" and "Boy With Luv."