SEOUL, April 28 (Yonhap) -- North Korea is likely to conduct a nuclear test between May and September this year, a government researcher said Thursday, amid signs of the reclusive country working to restore its purportedly demolished Punggye-ri testing site.

Lee Sang-min, a researcher at the Korea Institute for Defense Analyses (KIDA), raised the prospect during a forum here, as Seoul and Washington remain vigilant over the possibility of additional North Korean provocations, including another intercontinental ballistic missile (ICBM) launch.

"In May or sometime thereafter, the North is expected to conduct a seventh nuclear test, an additional ICBM launch or a military satellite launch," the researcher told the forum hosted by the state-run KIDA.

The North's next nuclear test, if conducted, could involve tactical nuclear warheads, such as a neutron bomb or electromagnetic pulse (EMP) bomb, he said.

Pyongyang has proclaimed its push to develop tactical nuclear arms, which Lee said appears aimed at securing capabilities to block allied forces from coming to the aid of South Korea in a contingency on the Korean Peninsula.

The researcher did not rule out the possibilities of the North's ground-based or maritime nuclear tests. The North's past six nuclear tests took place in underground tunnels at the testing site in Punggye-ri in the country's northeastern region.

Lee also said that the North cannot continue to focus wholly on its provocative mode and could seek a turnaround in relations with the United States around the U.S. mid-term elections slated for November or around the U.S. presidential poll in late 2024.

As for motives behind the North's strategic provocations, the researcher enumerated the North's political and military imperatives, such as the need to promote leader Kim Jong-un's legacies and modernize his country's weapons systems.

The three-axis system consists of Korea Massive Punishment and Retaliation (KMPR), an operational plan to incapacitate the North Korean leadership in a major conflict; the Kill Chain pre-emptive strike platform; and the Korea Air and Missile Defense system (KAMD). 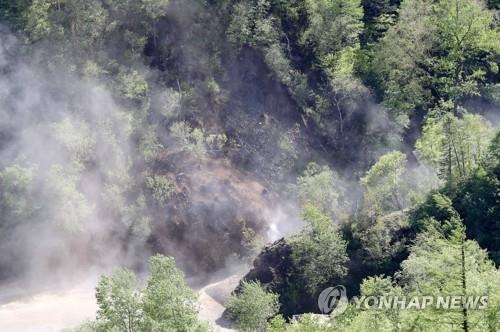