According to the records released by Rep. Kang Min-jung of the DP, Kim's wife, identified only by her surname Lee, had worked as a vocal music teacher at Seoul Arts High School from March 2, 2004, to May 31, 2005, and as an after-school instructor at Yewon School, an arts middle school in Seoul, from 2004 to 2005.

As is already known, Lee received a scholarship from the Fulbright program during the same period and went to Temple University in the U.S. as an exchange professor.

The DP lawmaker said there is an overlap between Lee's teaching careers at the two South Korean schools and her U.S. professorship. 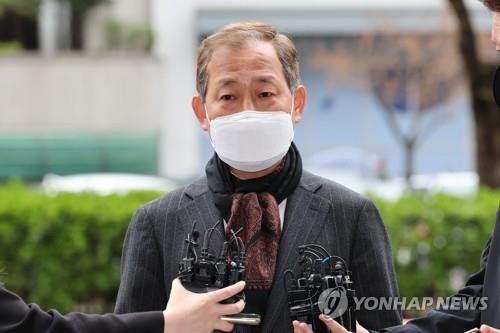 "At that time, online classes were not as common as they are now, and it is realistically difficult to work in South Korea and the U.S. at the same time," Kang said. "It is very likely that one of her careers was neglected or not done at all."

Earlier, a controversy erupted after it was made known Kim served as president of the Korea Fulbright Alumni Association from 2012 to 2015, and his son and daughter were given Fulbright scholarships at a similar time.

The Fulbright scholarship program is run by the Korean-American Educational Commission, a nonprofit institution jointly sponsored by Seoul and Washington to promote bilateral cultural and educational exchanges. The DP lawmaker estimates the total amount of Fulbright scholarships awarded to Kim's family may amount to between 300 million won (US$236,000) and 400 million won.