The Korean currency ended at 1,255.9 won to the greenback Friday, up 16.6 won from the previous session's close. The benchmark Korea Composite Stock Price Index rose more than 1 percent.

The won gained ground after the sixth straight session of decline, as demand for risky assets revived and exporters expanded dollar sales at month-end, according to currency analysts.

First Vice Finance Minister Lee Eog-weon made the verbal warning against the won's sharp decline before the market's open.

"Volatility in the won-dollar exchange rate has amplified amid fears about the Federal Reserve's aggressive rate hikes and economic growth concerns due to China's COVID-19 lockdown," Lee said at a government meeting on macroeconomics.

"The government will closely monitor the market and stick to the principle that it will take market-stabilizing measures if the won shows one-sided movement," he added. 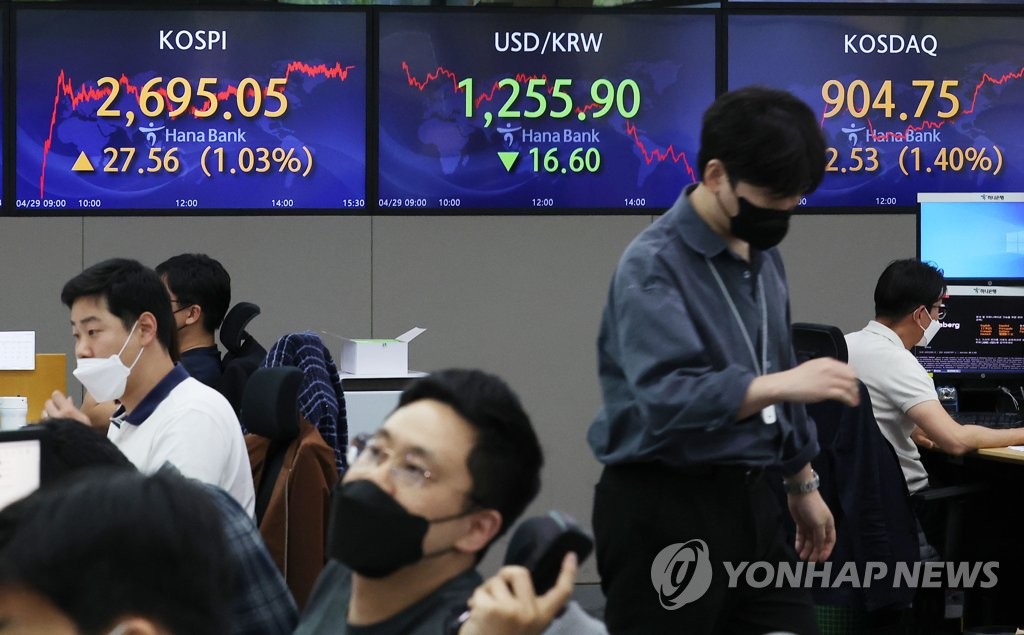 South Korean economic policymakers recently issued verbal warnings about the won's sharp weakness. Despite verbal intervention by the finance minister, the Korean currency dropped to the 1,270 won-level to the dollar for the first time in 25 months Thursday.

The won's weakness has accelerated in recent sessions amid the prospect of the Fed's aggressive monetary tightening and concerns about the global economic slowdown.

Fed Chairman Jerome Powell signaled a half percentage-point rate hike in next week's policy meeting as U.S. inflation jumped to a 41-year high in March. Last month, the U.S. central bank raised the policy rate by a quarter percentage point to 0.25-0.5 percent, the first rate hike since 2018.

Amid fast-rising U.S. interest rates, some market watchers voiced concerns about the narrowing interest rate gap between South Korea and the U.S., and slowing inflows of foreign funds.

Lee dismissed the possibility of a sharp outflow of foreign capital.

"There is a limited possibility that foreign capital will abruptly flee the Korean market in light of South Korea's strong economic fundamentals and external credits and its capability to absorb external shocks," he noted.