SEOUL, May 2 (Yonhap) -- South Korea's finance minister nominee said Monday the country's consumer prices could top the March growth rate of 4.1 percent for the time being as inflation is under upward pressure amid soaring energy costs.

Rep. Choo Kyung-ho, also named to double as the deputy prime minister for economic affairs, made the remarks during a parliamentary confirmation hearing.

"Inflation is likely to remain unstable for the time being in a way that could further worsen above the March growth rate of 4.1 percent," Choo said.

South Korea's consumer prices grew more than 4 percent for the first time in more than a decade in March as Russia's war with Ukraine has jacked up energy and other commodity prices. In February, inflation rose 3.7 percent on-year.

The International Monetary Fund recently lowered its 2022 growth outlook for the South Korean economy to 2.5 percent while raising its inflation projection to 4 percent. The Bank of Korea aims to keep annual inflation at 2 percent over the medium term.

Choo said the South Korean economy is in a "grave" situation where low economic growth could be entrenched while inflation runs high.

"The country could be stuck in a trap of low growth. South Korea's potential economic growth rate has continued to decline as the government-led growth has sapped vitality in the private sector," he added. 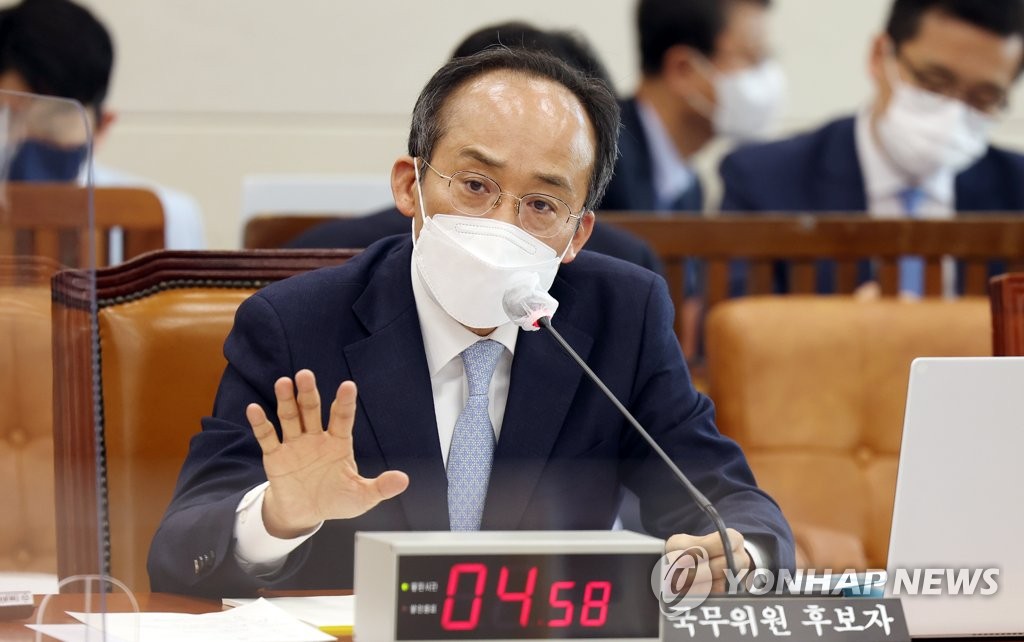 Meanwhile, Choo raised the need to delay a planned taxation of capital gains from financial investments by two years into 2025.

Starting next year, the government plans to levy the capital gains tax rate of 20 percent on financial investments, including stocks, bonds and funds. For stock investment, investors should pay a capital gain tax on profits that exceed 50 million won (US$39,500).

"There is a need to prod more funds to flow into the stock market by putting off a capital gain tax on financial investments and lowering a stock transaction tax," Choo said.

During election campaigning, President-elect Yoon Suk-yeol said he will abolish the capital gain tax on stock investment in a bid to support retail investors, while maintaining the stock transaction tax at certain levels.

Last year, South Korea lowered the stock transaction tax rate on listed shares to 0.23 percent from 0.25 percent. The government plans to further cut the rate to 0.15 percent starting 2023, when it will begin to levy the financial investment capital gain tax.