SEOUL, May 2 (Yonhap) -- Prime Minister nominee Han Duck-soo said Monday that stabilizing the economy for ordinary people's livelihoods will be his top priority and he will use every policy measure possible to achieve that goal once he gets the country's No. 2 job.

Han, who has been nominated by President-elect Yoon Suk-yeol as the first prime minster of the incoming government, made the remark during his confirmation hearing, adding that he will preempt factors that make prices unstable in advance and improve market structure.

"I will also change the regulatory framework," Han said in his opening speech. "I will get rid of chunks of regulations that burden business activities, and support innovation in new industry development to secure new growth engines."

Han, who already served as the country's prime minister during the Roh Moo-hyun administration from 2007 to 2008, also vowed to overcome the COVID-19 crisis for the country's return to pre-pandemic life.

"Although the current government has worked hard to protect the people's lives and safety, I believe the COVID-19 crisis is not over," he said.

"(Kim) has sent shockwaves throughout the international community, and this has raised an important issue," Han added.

Addressing his military commanders during a large street parade in late April, Kim called on the armed forces to continuously develop their powers, so that Pyongyang could "preemptively and thoroughly contain and frustrate all dangerous attempts and threatening moves, including ever-escalating nuclear threats from hostile forces, if necessary."

Han said Seoul and Washington should have in-depth talks on how to develop deterrence against North Korean nuclear capabilities during U.S. President Joe Biden's visit to South Korea later this month.

Biden is scheduled to visit South Korea from May 20 to 22, and will meet with Yoon for their first summit on May 21, just 11 days after Yoon takes office.

When asked by a lawmaker about his attendance at a birthday party in Seoul for then Japanese Emperor Akihito in 2013, Han replied that historical issues between the two nations should not hinder economic and future-oriented relations.

Han said relations with Japan are "difficult, but this past history should not hamper our economy or future." Han said he attended the birthday party as a head of a trade organization.

Han's confirmation hearing was rescheduled for this week after last week's hearing fell apart due to boycotts by the ruling Democratic Party (DP) and the Justice Party. Lawmakers from the two parties did not take part in two days of sessions, citing Han's failure to submit requested data on real-estate transactions, tax payment and other issues.

In the hearing, Han, who boasts more than 40 years of experience in public service, was grilled about alleged conflicts of interest related to his home rental in the 1990s and also the hefty salary he received as an adviser to law firm Kim & Chang.

DP lawmakers raised suspicions of conflict of interest over Han's house being rented to local affiliates of two U.S. companies pursuing business interests in the South Korean market in the 1990s when he was serving in high-ranking government positions in the trade sector.

Han denied any wrongdoing related to his home rental.

On criticism over his revolving door move and the hefty salary he received from Kim & Chang, Han said he feels sorry from the public's viewpoint but refuted conflict of interest claims.

"I have never called or made requests to my junior colleagues for a case," he said. "The reason why I went to Kim & Chang is that attracting foreign investments and explaining our economy were not different from my public diplomacy work." 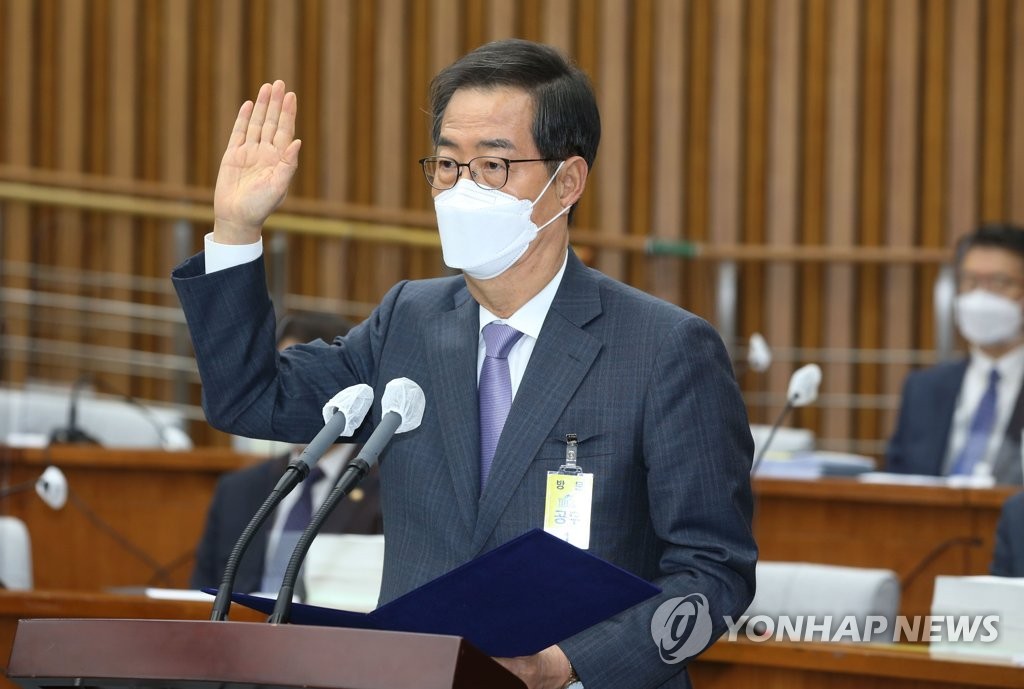