(ATTN: UPDATES with veto request by prosecution in last para)

The appeal came one day before the ruling Democratic Party (DP) is set to railroad through the National Assembly the second and final part of a package of legislation aimed at reducing and ultimately removing the prosecution's investigative powers.

The DP hopes to postpone this week's Cabinet session from Tuesday to Wednesday so the legislation can be signed into law before President-elect Yoon Suk-yeol takes office on May 10. 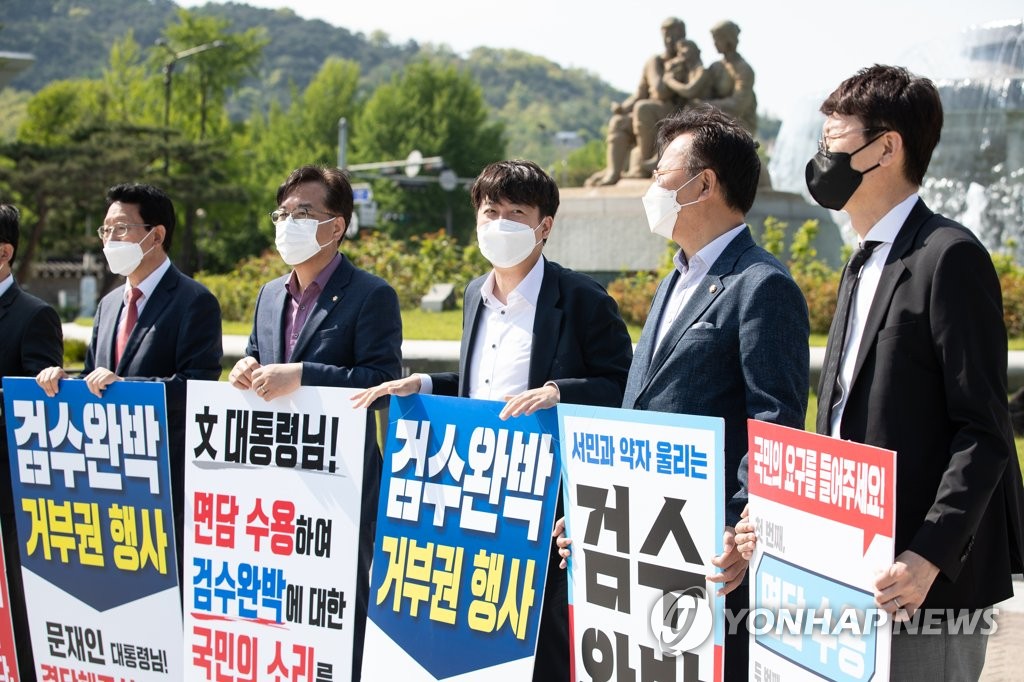 "The only thing that is left now is President Moon's veto, and in order to fulfill the president's duty to defend the constitutional government, it is only right to exercise that veto," PPP floor leader Rep. Kweon Seong-dong said during a party meeting.

The rival parties have been wrangling for weeks over the bills as the DP has insisted they are necessary to ensure the prosecution does not abuse its investigative powers for political purposes, while the PPP has countered they will leave the people with fewer means to seek justice for crimes.

The parties reached a compromise deal under which the prosecution's investigative powers would be reduced from six crime types to two -- corruption and economic crimes -- before being removed completely, but the PPP backtracked amid criticism the agreement stripped the prosecution of its right to investigate election crimes.

The DP forged ahead with passing one of the bills Saturday and is set to pass the second on Tuesday.

"I won't keep my hopes up that President Moon will exercise his veto," PPP Chairman Lee Jun-seok said at the meeting, warning, however, that the legislation will not shield the Moon government or the DP from potential probes.

"The Democratic Party will pay a large price for its recklessness and the (June 1) local elections will be the first opportunity for judgment," he said.

The Supreme Prosecutors Office also said it submitted a request earlier in the day asking Justice Minister Park Beom-kye to make a recommendation to President Moon Jae-in during the Cabinet meeting to veto the legislation.