(ATTN: UPDATES with additional info in paras 6-7)
By Song Sang-ho and Kang Yoon-seung

SEOUL, May 3 (Yonhap) -- South Korea and the United States plan to kick off regular combined air force drills next week, informed sources said Tuesday, in yet another move to highlight their defense posture especially against North Korea's evolving missile threats.

The allies are set to begin the two-week Korea Flying Training on Monday, the eve of the inauguration of President-elect Yoon Suk-yeol, who has vowed to bolster the Seoul-Washington security alliance under his slogan of "peace through strength."

"The two air forces plan to begin the two-week training on the same scale as the past trainings," one source told Yonhap News Agency on condition of anonymity.

The source stopped short of giving details including specific air assets to be mobilized.

The upcoming training is a scaled-back version of the large-scale Max Thunder exercise that the two countries staged in the past with the massive mobilization of their air assets and service members.

For the Ship Anti-Submarine Warfare Readiness and Evaluation Measurement (SHAREM) exercise, the Navies are set to mobilize a series of key assets, including the guided-missile USS Sampson destroyer that arrived here last week.

South Korea and the U.S. have recently stepped up their security coordination in the wake of North Korea's missile launches, including its test-firing of an intercontinental ballistic missile (ICBM) on March 24. 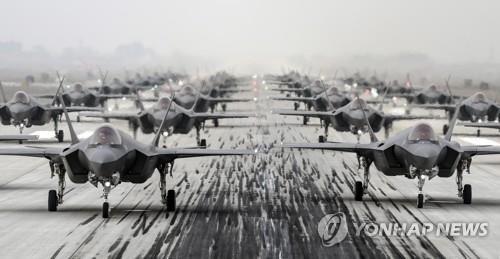