SEOUL, May 3 (Yonhap) -- Education Minister nominee Kim In-chul resigned Tuesday amid allegations of favoritism related to his family's reception of scholarships from a nonprofit organization jointly supported by the United States and South Korean governments. 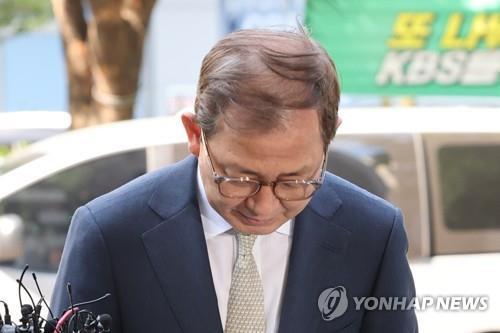 "Today, I resign from my candidacy as deputy prime minister and education minister. I wanted to return the benefits I had received from the country and society through my last (public) service but I was lacking a lot," Kim said in a meeting with reporters at his office.

"I won't give any explanation. It's all my fault and negligence," he said, expressing his apology to President-elect Yoon and a wish for the success of his government.

Kim, a former president of Hankuk University of Foreign Studies (HUFS), was nominated by Yoon on April 13 as education minister and deputy prime minister for social affairs. But a controversy has erupted after it was made known Kim served as president of the Korea Fulbright Alumni Association from 2012 to 2015, and his son and daughter were given Fulbright scholarships at a similar time.

The Fulbright scholarship program is run by the Korean-American Educational Commission, a nonprofit institution jointly sponsored by Seoul and Washington to promote bilateral cultural and educational exchanges. The Democratic Party (DP) estimates the total amount of Fulbright scholarships awarded to Kim's family may amount to between 300 million won (US$236,000) and 400 million won.

The DP has also raised allegations of Kim's thesis plagiarism, use of violent words to HUFS students and other misconduct. Kim's parliamentary confirmation hearing was scheduled for Friday.

After hearing the news of Kim's resignation, Rep. Park Hong-geun, the DP's floor leader, said Yoon's other ministerial candidates tainted by various allegations should also step down as soon as possible.

The minor opposition Justice Party demanded an apology from Yoon and urged Kim to face an investigation over his allegations.